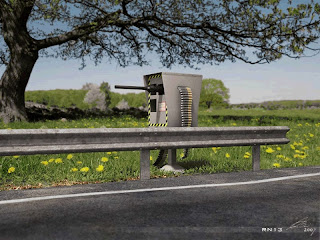 The advice given to Bob Woodward: "Follow the money" by "Deep Throat" in the Watergate flap is especially applicable when comparing issues of highway safety.

Your humble scribbler, during the course of his former career has not only written a respectable number of traffic citations but worked briefly as liaison sergeant between the Los Angeles County Sheriff's Department and several incorporated municipalities that contracted for traffic enforcement with that Department. State and especially local government politicians and bureaucrats apply continuous pressure on enforcement personnel to generate increased revenue from fines and penalties.

The average speed limit posted in most law enforcement jurisdictions is usually touted as being determined by traffic engineers for the safety of those using the streets and highways. I would submit that more often than not these limits are the result of revenue considerations e.g. governmental avarice.

One need only observe traffic flowing down a typical 4 lane divided highway where the posted limit is 45 mph to determine that traffic (depending on prevailing conditions) is moving between 10 and 20 mph over that limit with no observable hazard except when the radar alarm of the motorist ahead of you goes off and he decelerates dangerously to avoid the cost of a speeding citation.

One study by the U.S. National Motorists Association found the safest period on Montana's Interstate highways was when there were no daytime speed limits or enforceable speed laws at all. When Montana implemented a new "safety program," imposing speed limits and enforcement, the state's fatal accident rate didn't just increase, it doubled, according to NMA statistics.

Other interesting findings of the Montana study were that vehicles traveling faster than average had the lowest accident rates, and there was no positive correlation between speed enforcement and accident rates on rural highways. If anything, the highways became less safe with enforcement....The preponderance of evidence, as opposed to supposition, prejudice, hysteria and conventional wisdom, indicates speed, per se, doesn't "kill," that there are massive economic costs consequential to imposing unnecessarily low speed limits, and that there is a logical and legitimate case for raising - not lowering - speed limits [or better yet, eliminating them]!

The most effective strategy for promoting highway safety would be to concentrate on the apprehension of motorists who drive recklessly and engage in dangerous maneuvers likely to result in collisions. Such actions should result in reckless driving citations and arrests. The assertion by those who argue that increases or elimination of speed limits will result in chaos on the highways is nonsense not supported by empirical evidence.

Even more evidence that many traffic enforcement efforts are focused on revenue generation is found in the so called "weigh stations" scattered along the highly travelled highways. This is especially true in the state of California which has invested enormous funds in the construction and expansion of these facilities which have been found to be highly cost effective. At these locations commercial vehicles are randomly inspected by specially trained technicians. Almost no inspected vehicle or driver escapes one of these encounters without a citation resulting in large fines and or penalties quite often for infractions of a minor or insignificant nature

Another clue as to what is going on is found in a law suit filed by the Owner-Operator Independent Drivers Association . It has documented "hundreds of safety violations by Mexican trucks rolling on U.S. roads under the Department of Transportation's Mexican truck demonstration project." These trucks when found to be unsafe were removed from the highway while minor violations that a domestic operator would be cited for are ignored, probably due to the unlikelihood of collecting the penalties. This double standard is the basis for the lawsuit filed in Federal court.

For the most part the harassment of commercial carriers is ignored by the general public as most motorists are not directly impacted by these outrages. However the additional costs of this revenue enhancement must be passed along by the carriers in the form of higher rates which are ultimately embedded in the final cost of all consumer products.

The most common arguments put forward in support of all of this regulatory nonsense are that without strict regulation the ordinary citizen would engage in behavior that would result in chaos and carnage. Such assertions fly in the face of common sense and human nature in which harm avoidance is the first natural law.

ΛΕΟΝΙΔΑΣ, I agree wholeheartedly, and, I borrowed the picture and sent it around our Company as your patented idea to quell speeding on our highways.

Our Traffic Division does "most" of the signal and highway work throughout Ventura and LA counties.