As a followup to our previous posting of 19 July, we can lay to rest the questions of our readers as to the motivation behind the convoluted (female?) District of Columbia reasoning behind the classification of a semiautomatic Colt model 1911 hand gun in the possession of a law abiding citizen as a "machine gun" thanks to Ol' Remus of the Woodpile Report. 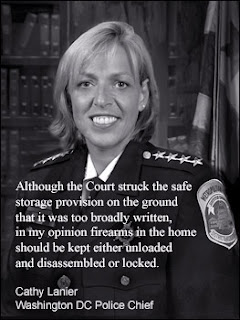 Back in the old days when ΛΕΟΝΙΔΑΣ was sworn in as a police/peace officer, he distinctly remembers promising to "uphold and enforce the laws of the United States, the state of California and the County of Los Angeles". He doesn't remember anything about "finding additional ways to protect...residents against the scourge of gun violence". Perhaps the "chiefette" would consider summary execution of gang bangers apprehended perpetrating "gun violence" against ordinary citizens whom she would deny the right of self defense?

Chief Lanier's related actions regarding arrested felons however, indicate she is more inclined toward "mercy" toward accused felons than otherwise law abiding citizens as indicated by her "cite and release" program for politically connected felons.
at 8:57 PM

How'd you get banned at Little Green Footballs?

If you support European anti muslims you are banned as a "neo fascist" sympathizer. Go to http://gatesofvienna.blogspot.com/

Armed citizens doing her job for her... can't have that.

"in my opinion, firearms in the home should be kept either disassembled or unloaded and locked"

The definition of hubris...

A law enforcement officer who apparently thinks her "opinion" is law. Or at least enough so that her opinion TRUMPS what is the law. Goober