Although your humble scribbler hesitates to admit it, he remembers as a callow lad the advertising slogan of Ford Motor Co for its 1949 model year: "There's a Ford in your Future". The product appeared to be successful, as Ford outsold its nearest competitor Chevrolet each year until 1956. Those were the halcyon days for the automotive industry in the free world while in the planned economies behind the "Iron Curtain" the Soviets were producing such socialist cars as the Lada, Gaz, Moskovitch, Uaz, Izh, Zaz, and for the upper echelons in the Party the Zil pictured here with its most famous fan.

As you can see the Zil line of cars were of considerable mass and were also a more or less copy of the US Packard. We are unable to determine the MPG rating of these cars as the Eastern bloc seems to have neglected to burden the government manufacturers with the equivalent of our EPA.

One of the "popular" cars built in the DDR (East Germany) at about the time Ford and Chevrolet were enjoying such success in the West was the Trabant P-601 pictured below belching considerable pollution to the apparent bemusement of the gentleman in the right of the photo. Is he perhaps a member of the communist equivalent of GreenPeace? 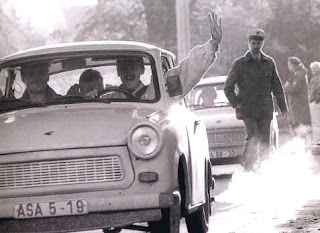 The following appears to be a poor quality translation from Russian of a blurb on the Trabant which exhibits the inspired styling and reliability of a vehicle designed and engineered by a third world DMV clerk.

The Trabant, since the end of the production, obtained an outstanding place in the automotive history. Several owners restores these old and cheap cars, enjoying the sound (and the smoke...) of the two-stroke engines! The Trabant is perfect, as relic of "industrial archeology" (like 2CV, Beetle, Mini and -to remain in the field of the eastern cars- the Yugo), to be painted, modified, tuned in a million of ways!

An idea of the size of these cars is evident by observing the driver and his passengers as well as the proud owner pictured below. 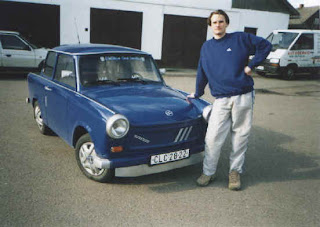 These images can give us a view into our own future as the Obamamobiles are turned loose on our roadways to deal with traffic consisting of many 18 wheel behemoths. Apropos such a scenario we must consider the following cost/benefit analysis:

The U.S. Environmental Protection Agency – for the purposes of risk assessment – values a single human life at $6.9 million," Milloy wrote. "So under the new mileage standards, it would cost about $35 million per day in human lives (not including non-fatal injuries) to save $1 million in gas.

Most of our citizenry (even products of the current "progressive" education system) are aware of the failure of the collectivist governing/economic model as evidenced by the collapse of the Soviet union some 20 years ago. Perhaps they believe however, as a Communist former school chum of Mrs. ΛΕΟΝΙΔΑΣ states : "It would have succeeded had the right people been in charge." Lets have a show of hands of those who will bet that the "Messiah" and his Marxist friends can pull it off.

Meanwhile Praise the Lord and pass the ammunition (and the spam). 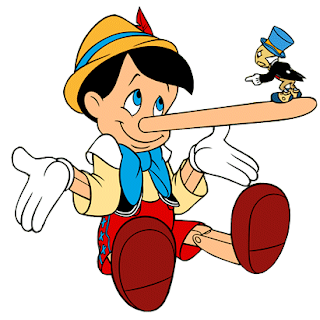 If there is a better example of the Byzantine lawlessness of our current and recent government as evidenced by the ongoing kerfuffel over the issue of torture, please dear reader point it out.

Under TITLE 18 PART I CHAPTER 47 § 1001 of the US Code enacted by Congress, it is a felony to in effect lie to any federal agent or official. This statute should not be confused with perjury which consists of lying under oath. Indeed, section (b) of the above statute specifically exempts lawyers while section (c) exempts legislators under most instances. Perhaps these provisions account for the known propensity of members of these two groups to engage in "deceptive" pronouncements and political prosecutions.
At recent press conferences the Speaker of the House of Representatives accused members of the CIA of felonies:

Mrs. Pelosi last week said the CIA lied to her in 2002 by concealing that it had already used enhanced interrogation techniques, and said the agency continues to lie today by mischaracterizing the briefing. She also said the CIA lied in the run-up to the Iraq war.

"They mislead us all the time," she said.

On the other hand, spokespersons (including Mr. Panetta) for the Central Intelligence Agency continue to insist that briefings to members of congress including Mrs. Pelosi on the subject at hand and others as well, contain no misleading statements nor has there existed any policy to mislead members of Congress.

Clearly, one or more of the parties to this flap are lying; yet the majority party in Congress continues to defeat any effort directed at resolving the issue by a formal investigation.

My, how the times have changed since the political railroading of Scooter Libby.
at 9:31 AM No comments: 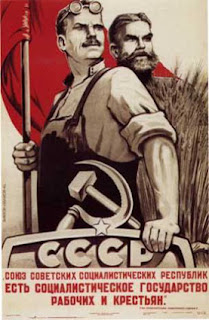 In a previous life, your humble correspondent often passed idle hours for amusement at sea listening to Russian propaganda broadcast in English via Radio Kiev from the Soviet Republic of Ukraine. Amazing isn't it, how the world has changed. I will leave it to you, dear reader to guess the source of the following excerpted quotation dated 15 May 2009:

It must be said, that like the breaking of a great dam, the American decent [sic] into Marxism is happening with breath taking speed, against the back drop of a passive, hapless sheeple, excuse me dear reader, I meant people.

True, the situation has been well prepared on and off for the past century, especially the past twenty years. [...]Those lessons were taken and used to properly prepare the American populace for the surrender of their freedoms and souls, to the whims of their elites and betters.

First, the population was dumbed down through a politicized and substandard education system based on pop culture, rather then the classics. Americans know more about their favorite TV dramas then the drama in DC that directly affects their lives. They care more for their "right" to choke down a McDonalds burger or a BurgerKing burger than for their constitutional rights.