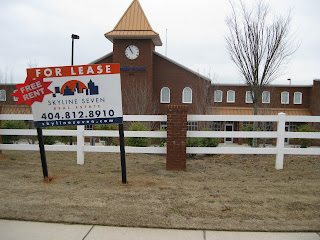 If many of you dear readers, like this writer, have been paying attention to the "mainstream" media recently you have heard that the US economy is in a slow but steady "recovery" from the financial crisis of 2007-2009. This drumbeat includes the recent data proving that the housing market has begun to rebound as evidenced by an increase in the prices of existing single family dwellings.

Our own experience here in west Georgia seems to refute such an assertion. Vacant homes in many residential neighborhoods in this area approaches 1 in 5 (20%). Two strip malls consisting of a dozen retail shops each which were completed in late 2009 and early 2010 remain completely vacant to this day with a recent sign at one of them announcing "free rent". (click on above image to enlarge)

Members of our family who have recently fled California with cash in hand have attempted to purchase at least a dozen properties listed "for sale" only to be advised by the agents that the properties are "under contract". Investigation has revealed that all of the properties are in the process of being transferred to the ownership of this or that limited liability corporation (L.L.C.).


...[W]hat’s fuelling the soft rebound in the U.S. housing market and home prices is something that’s never happened in our history. It’s not individuals buying houses who are moving prices and demand higher; it’s institutions. Yes, big institutional investors are buying houses—and in a big way!
The Blackstone Group L.P. (NYSE/BX) bought $2.5 billion worth of U.S. homes—that’s 16,000 units in total so far, with cash! In October of 2012, the company owned $1.5 billion worth of homes and was spending $100 million a week to purchase more! (Source: Bloomberg, January 9, 2013.)
Other companies like the Colony Capital LLC and Waypoint Homes are taking similar courses of action as the home prices increase. Colony Capital has already purchased 5,500 homes since April of 2012 and expects its investments to increase to $1.5 billion by the end of this year. Waypoint Homes has bought 2,500 home and plans to have a total of 10,000 homes by the end of 2013.

Indeed, a neighboring single family residence selling for $210,000 in 2007 and which stood vacant for 3 years after being abandoned by its resident owner was occupied a year ago by a "minority" single mother of three minor children whose rent is subsidized by the Dept. of Housing and Urban Development under Section 8.

As soon as the emerging glut in rental properties results in a lack of return to these corporate investors and the federal subsidies end as a result of the "Great Default", the fecal matter will definitely encounter the rotating ventilating device. I suggest that you gentle readers refuse to surrender your "personal defense" weapons. You may need them.

Since the unpleasantness last month in Newtown, Connecticut, our rulers and their myrmidons in the media, never wanting to allow a crisis to be "wasted" are all atwitter over the possibility of further voiding the second amendment to the Constitution by outlawing "assault" weapons. Indeed, the Vampire state in an apparent trifecta race with Kalifornia and Illinois has won first place by enacting a comprehensive attack on the ownership by mere mundanes of so called "assault" rifles including the AR 15 and all weapons of the Kilashnakov design. These scary appearing rifles, while having no functional distinction from ordinary semiautomatic weaponry are considered by our "Progressive" bettors to be evil by virtue of their "military style" and are therefore officially designated as "assault" weapons.

On the other-hand, the Department of Homeland Security via the General Services Administration has issued a solicitation for bids to supply 7000 "Personal Defense Weapons" for members of the Immigration & Customs Enforcement bureau. The weapons to be delivered are described as AR-15 platform rifles but containing the option of a selector switch enabling them to fire as either semiautomatic or full automatic as in machine gun.

Please note, gentle reader, that our government defines these items as "Personal Defense Weapons" whereas the version of this rifle sans the full automatic capability in the possession of an ordinary citizen is defined by the same government as an "assault weapon".

You simply can't make this shit up.