The extent to which the media have become the partisan apologists and attack apparatus for the Democratic socialist party begins to boggle the minds of those who remain sentient and less than enthusiastic about the assent to the White house of a committed Marxist and former adherent to the Muslim faith. Who would have conceived that the selection of a vice presidential candidate by a nominee who most would characterize as a geriatric pushover "Republican" could result in the pressing of the panic button by every leftist partisan and journalist (redundancy alert) from Seattle to Miami and beyond?

It would appear that the selection of a female, articulate, non feminazi conservative/libertarian to grace the number 2 spot on the ticket has forced these leftists over the edge to the extent that some are attempting to "unring the bell". For example the recent assertion by an obscure blogger that Mrs. Palin as mayor of a small town in "flyover country" had attempted to have a list of books banned from the municipal library was picked up and embellished by the Obama campaign to include the list of every publication ever banned in the US and reproduced on their website. Within two hours of the absurdity of this "report" being pointed out, the web page was taken down by the Obama campaign. Below is a screen shot of the since removed page. Click on images to enlarge. 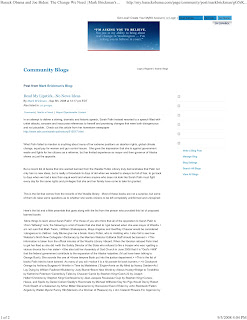 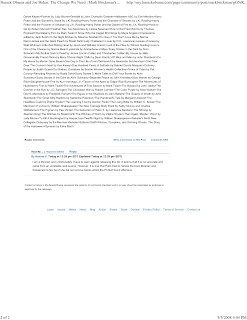 Likewise, the freudian slip by Obama concerning his "Muslim faith" in an interview with ABC's George Stephanopolus has since been removed by YouTube but has been copied and can be viewed below.

The willingness of most media outlets to carry water for the extreme left of the political spectrum appears to have little if any limits.

The negative smear campaign against Governor Palin has been truly sickening. let me sum up all that I know so far:

1.) It was alleged that Trig is actually Bristol's baby, without any proof whatsoever, and that they were covering up the pregnancy. Of course, that makes no sense because Bristol is CURRENTLY pregnant, and no effort has been made to cover up the pregnancy. PROVEN FALSE

2.) It was stated that having a pregnant teen daughter makes you incapable of being VP. Huh?

3.) it was stated that being a mother of 5, one being special needs, makes a woman incapable of being VP. This from the party that keeps most feminists in it's fold. Huh?

5.) Oldest son Track joined the army to avoid jail sentence for vandalizing school busses or drug charges, depending onwho you talk to. Never mind that the military doesn't do this sort of thing anymore, and in fact, you have to sign a paper saying that you are not joining in order to avoid civil censure and will be DISQUALIFIED as an enlistee if that is the case. Nver mind no record of any of this int he Alaska courts. Conveninetly, there was an incident of bus vandalism during Track's senior year in Wasilla, but how to prove it was Track that did it? PROBABLY FALSE, BUT NOT PROVEN. DEFINITELY IRRESPONSIBLE CONJECTURE, AT LEAST.

6.) Governor Palin's poor pre-natal care and lack of concern for her unborn fetus caused his down's syndrome (this one right from the mouth of Alan Colmes). Down's Syndrome is caused by having an extra gene, not by bad prenatal care. This baby had Down's before Governor Palin even knew she was pregnant. PROVEN FALSE

8.) Various racial slurs, statements, claims of statements, and also Alaska's lack of having racial minorities and therefore, Governor Palin's inability to relate to or deal with racial minorities (apparently, they are all from a different planet or something, and unless you are exposed to them constantly throughout your life, you'll never learn to communicate or associate with them and their strange ways /sarcasm). No statements verified or proven as of yet. Alaska's population of black people on par with most western states, but here is the clincher... HUGE proportion of the state is made up of native american, first nation, and inuit. Racial minority, anyone?

And the wild conjecture goes on. Furthermore, a serious misunderstanding of Christianity is occuring when the Leftists wonder why Governor Palin is able to claim that she is a good christian when her daughter is pregnant out of wedlock. Still no understanding whatsoever of what it means to be Christian, I guess.

This has really been disgusting. I am sickened at the state of our political arena, and hate the fact that a good person like Palin gets totally nailed with lies and conjecture while an underhanded scheming rascal, who has lived his entire life life on the public dole who could be nailed with TRUTH, gets a free pass, and in fact, is helped along, by our corrupt media. Goober

- A reader of Berit's blog

Erik,
Few of the readers of this blog are conversant in Greek (that would include ΛΕΟΝΙΔΑΣ). For their benefit I will offer a translation of your quote from the monument at Thermopylae: "Go tell the Spartans, stranger passing by, that here, obedient to their laws, we lie"