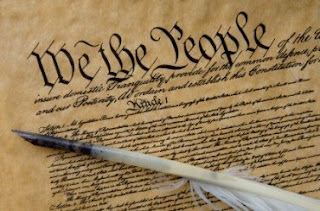 In less than three weeks the US Supreme Court will hear oral arguments in the case of McDonald v City of Chicago.  The court will decide if the Second Amendment which states: "...the right of the people to keep and bear arms shall not be infringed." applies to the various states and local governments. In 2008 the court held that the plain language of the Second Amendment applies to the District of Columbia which like Chicago had ordinances effectively prohibiting the possession of firearms in its jurisdiction. The odds are that the Chicago law will be struck down as unconstitutional under the Fourteenth Amendment.

The decision will doubtless impact many restrictive gun laws in multiple states. A case in point is the (idiotic?) law in California (section 12031 (a) (1) of the penal code)  which prohibits the carrying without a concealed carry permit of a loaded firearm in any incorporated city or designated area in the unincorporated area of any county. The law as interpreted by California courts allows the carrying of a concealable firearm in those prohibited areas if it is "unloaded". Of course All schools and public buildings are "gun free" zones.

One can imagine the confusing situation faced by a non permitted citizen who wishes to exercise his second Amendment "right" under these Byzantine laws, especially when sheriffs and police chiefs routinely refuse the issuance of concealed carry permits to all but a favored class of applicants.

Recently a group of California residents protesting this situation has begun to openly carry their hand guns in various venues such as Starbucks coffee shops in the Bay area. The response of some police personnel to these protests is about what one could expect of members of a class whose monopoly of certain "rights" is threatened as is illustrated by the following exchange discussing a legal instance of open carry on the face book threads of one officer Tauson:


"Haha, we had one guy last week try to do it!"...""He got proned out and reminded where he was at and that turds will jack him for his gun in a heartbeat!..."Sounds like you had someone practicing their 2nd amendment rights last night!" Tuason wrote. "Should've pulled the AR out and prone them all out! And if one of them makes a furtive movement ... 2 weeks off!!!"

The two weeks off (with pay of course) refers to the internal shooting investigation period.

I have a question for those who allege that law abiding citizens have certain "rights" guaranteed by the Constitution: does one need a permit to exercise a right? If you, dear reader, believe that a permit is only required for a privilege you would be in error.

The Supreme Court will hand down its ruling before the June adjournment. We are breathlessly awaiting the determination of at least 5 of our black robed demigods. Any bets on the voting alignment?

Expect a nuanced interpretation of limited rights, which is to say "infringed".

Language and intent of 2A is plain. If SCOTUS says 2A is not valid, then SCOTUS becomes "Null and Void" (to cite Cheif Justice John Marshall, 1803, Marbury vs Madison, as precedent).

Declaration of Independence
"But when a long train of abuses and usurpations, pursuing invariably the same Object evinces a design to reduce them under absolute Despotism, it is their right, it is their duty, to throw off such Government, and to provide new Guards for their future security. …"

Question, Former Copper Friend.....So, here in SoCal, can an unloaded firearm be carried concealed, and the loaded clip in a separate pocket?

Answer: Carrying the firearm concealed without "permission" is a violation of Cal P.C. section 12031 (a) (1). It is still a "firearm" even if it is unloaded. The concealed firearm is considered "loaded" if "[2. The firearm and unexpended ammunition capable of being discharged from that firearm were either in the defendant's immediate possession or readily accessible to (him/her).]".
This appears to be a Kalifornia Catch 22: If the gun is in plain view and unloaded (an invitation to theft), the ammo may be accessible. If it is concealed (an awkward club) the ammo must be secured (not readily available).
Disclaimer: This answer/comment should not be construed as legal advice.
Real advice: 1 view THIS video!! 2 Escape the Peoples Republic ASAP.

This is a wonderful blog. The things given are unanimous and needs to be appreciated by everyone.
=================
mitchell
Street Fights

The Second Amendment is crystal clear to people like us, but for leftists the Illinois Constitution is even less ambiguous:

"Subject only to the police power, the right of the individual citizen to keep and bear arms shall not be infringed."

Here it clearly affirms an individual right to bear arms not connected in any way to service in the militia.

Liberals, of course, consider gun control a source of those aims but this is nonsense. To believe that, the Illinois Constitution would be AFFIRMING a right in the same sentence that it is DENYING a right.

The law would permit the state to place some restrictions on the places, manner, and persons permitted to carry arms, but not an outright ban. The restrictions could not be tantamount to a ban.

Regardless of any acknowledgment of this right in a Constitution, we must remind people that Constitutions do not confer rights. You exist with your rights. Those rights are not always listed in Constitutions.

In The Law by Bastiat, he states that police power is essentially derived from the right to self-defense. Police power is therefore the collective application of self-defense for the community against miscreants, malfeasance, and breaches of order and peace affecting many people.

The external bodies we call "police", "militia" and "army" are the extensions of the right to self-defense, not a replacement for it.