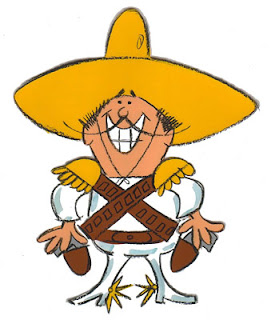 The recent brouhaha over Arizona's enactment of legislation attempting to address the serious negative impacts of the porous border with Mexico continue, in the opinion of this humble writer to overlook some important factors.

The caterwauling raised by those feigning concern over the civil rights of the "bandalitos" (illegal aliens) is especially amusing and arises from either ignorance or cynical political motives. If any of those activists/politicians, from the obamunists to Marco Rubio, who states that: "I think aspects of the law, especially that dealing with ‘reasonable suspicion,’ are going to put our law enforcement officers in an incredibly difficult position." can cite a single police power conferred by the Arizona statutes that exceeds those assigned to federal officers, I for one am prepared to eat a crow sandwich.

Probably the most effective way to address the immigration portion of the border problem would include rigidly enforcing the following:
1) All undocumented foreigners within the borders to be declared felons
2) Foreign residents must prove they are not a burden on society
3) Immigration authorities must have a record of each foreign visitor
4) Visitors must not violate their visa status
5) A ban on interfering with internal politics i.e. public protests and marches
6) Imprisonment or deportation of those entering under false pretenses
7) Those aiding illegal immigration shall be imprisoned
8) Public transport companies that import undocumented foreigners will be fined
9) Marrying a foreigner for the sole purpose of legalizing residence is prohibited

Such "draconian" measures would doubtless elicit a cacophony of protestations from not only apparatchiks of the  Democratic party but "civil rights" activists and the ACLU, not to mention president Calderón of México.

Oh, by the way; did I neglect to mention that the above 9 items and others were extracted and translated from México's  Ley General de Población? These sections are strictly enforced. Simply ask those citizens of Guatemala, El Salvador and NIcaragua who have run afoul of México's immigration law.

Additionally, a reconsideration of the US "War" on drugs would also go a long way in ameliorating the border difficulties.
at 2:33 PM

Nick,
You are correct. I lived in Mexico for 2 years and found the lower level bureaucracy to be almost totally corrupt. The up side was that once they received their small bribe they usually left you alone. this is contrasted with the US variety who will hound you for your last centavo.