Déjà Vu with a Variation

Easter Greetings to all you impatient readers. Your humble blogster has finally (with the assistance of some truly outstanding 21 year old Panamanian rum) toasted the Rising of the Christian Savior and partially overcome his depression induced by observing the recent unfolding events on the planet's social, cultural and economic stage.

In many respects recent events as viewed by us superanuated citizens exhibit copious doses of déjà vu. For example, the recent spike in the price of motor fuel is considered sufficiently threatening to our political rulers that we are being assured that the "authorities" will leave "no stone unturned" in unmasking the "possibly" illegal actions of "those in the oil and gas industry" responsible for this outrage. What a relief.

Such announcements by politicians seem to be routine when the media begin reporting public outrage, and to that extent there is little surprise. What is a new twist to the currently unfolding price increases is the willingness by the mainstream media to insulate the political establishment from any culpability. We are not now treated to the shrill condemnations of "gouging and profiteering by Bush/Cheney oil industry cronies". Instead, reporters of MSNBC and the New York Times hasten to assure us that Mr Obama is blameless. Wait a minute!

1) Domestic exploration and drilling for new sources and often in producing/existing crude oil fields has been effectively banned by Mr Obama's bureaucratic goons throughout this administration; thus withholding billions of barrels from the global market thereby reducing supply of the product.


2) No permits for the construction of new petroleum refining facilities have been issued for over 3 decades in spite of exponentially increasing demand.


3) The Federal Reserve has been operating its printing presses at warp speed in excess of 2.5 years to pay for out-of-control federal expenditures resulting in the devaluation of the US dollars which are used to purchase crude oil on the international markets.

To illustrate this condition, simply examine the chart below recently posted by Karl Denninger at The Market Ticker®. 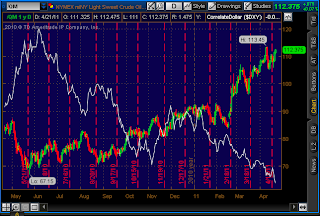 The red and green line is the price of crude oil per barrel and the white line is the value of the US dollar.

In modern times politicians have been extremely sensitive to the consumer price of motor fuel. In some nations the low price of gasoline is subsidized by the government. In Venezuela when ΛΕΟΝΙΔΑΣ was cruising aboard his auxiliary sloop LEONIDAS, the mid 1980s' price of diesel fuel for foreign flagged vessels at the fuel docks amounted to US $1.55/gallon. The price to all domestic Venezuelan consumers was US $.06/gallon. The price for Venezuelan consumers of gasoline was equivalent to US $.12/gallon. These are the same prices that continue today. Indeed we witnessed subsidized Venezuelan fuel for sale in the harbors of Grenada and Bequia by enterprising smugglers.

The last time a Venezuelan leader successfully raised gas prices was in 1998, when then-President Rafael Caldera also ended Petróleos de Venezuela's monopoly on domestic gasoline sales. Foreign companies, which were promised that the country would eventually end fixed gasoline prices, rushed in, hoping to capitalize on growing demand. But when Chávez took office in 1999, those promises were forgotten. Many of the companies that invested in stations, including Shell and ExxonMobil (XOM), subsequently wrote off their investments and left.
In the years since, prices of most other goods have risen dramatically—consumer prices in general are up fivefold since 1998—and the Venezuelan minimum wage has kept pace. The widening gap with gas prices has forced many gas station operators to shut down.

The US government has long been loath to admit the true extent of monetary and thus price inflation as reported by the Consumer Price Index which conveniently omits the costs of energy and food. The index does however factor in shelter i.e. home prices which have declined sharply since 2008.

An excellent example of what our rulers have done in order to finance the welfare/warfare state is observed in the decline in the value of the US dollar since the establishment of the Federal Reserve bank in 1913: The price of a high quality Men's suit in 1910 was $20.00 i.e. one ounce of gold. In 2011 an equivalent man's suit is priced at about $1450.00 i.e. just under the present price of 1 oz of gold. The slight decline in the cost of today's men's suits is the productivity increase due to recent advances in technology. Other such comparisons abound.
at 2:23 PM