Heads We Win; Tails Y'all Lose

As we witness the ongoing economic and financial collapse of our formerly cozy and apparently secure existence there is occasionally here and there an example of ironic levity usually generated by our ruling elite. As one example, we learn that during the recent London "riots" as British subjects have been effectively disarmed by Her Majesty's constabulary, shopkeepers and local residents have had occasion to resort to the employment of sporting equipment in an effort to defend their lives and property.  As a result, a brisk (6000% increase on Amazon UK) trade in baseball bats has emerged with the aluminum variety selling for USD $28.00.

The Turkish shopkeepers observed by the police wielding these implements have been advised that it is allowable to utilize them inside their shops defensively but are subject to arrest if caught threatening a "youth" outside preparing to launch a brick or molotov cocktail. You can't make this stuff up.

Meanwhile, on this side of the pond our very own Federal Emergency Management Administration (FEMA) which falls under the aegis of the Department of Homeland Security, on its web site and in various pamphlets  advises us to be prepared for all variety of emergent situations by assembling "kits" containing useful items such as: food, water, waterproof matches, flashlights with spare batteries etc. As ATMs and cash registers are likely to be inoperative due to the crashing of the power grid, cash and coins should be available for emergency purchases. Additionally Ms Napolitano's Department alleges that "...lone wolves and small terrorist cells embracing violent rightwing extremist ideology are the most dangerous domestic terrorism threat in the United States." Ignore those jihadists enrolling in flight training classes skipping the instructions on landing and takeoff.

On the other hand, the FBI's Bureau of Justice [sic] Assistance has recently disseminated a briefing for the proprietors of military surplus businesses and gun stores to be on the lookout for persons making bulk purchases of among other items: weatherproofed ammo cans, match containers meals ready to eat, night vision devices, night flashlights etc.  The surplus store operators are urged to: "require valid ID from all new customers, keep records of purchases and make note of suspicious statements, people and vehicles." Particularly suspicious are customers insisting using cash for their purchases. 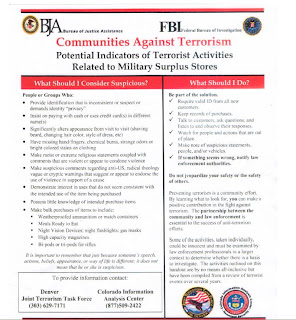 It seems that if one follows the advice of one department of our rulers' bureaucracy he runs the risk of being scrutinized by another as a possible "terrorist".

As our descent into the abyss continues, we would be well advised to maintain a sense of humor.
at 9:16 PM

A bulk ammunition purchase was part of filling my emergency kit. But you reminded me i need to get off my butt tomorrow and buy some more supplies.

I dont know what Napolitano was thinking. For that matter, what makes that fat, skunk-haired liberal think she knows anything about emergency preparedness or homeland security? A boy scout would be better qualified for that job.