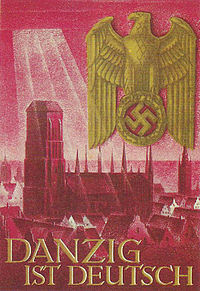 As a student of history, your humble blogster is occasionally struck by parallels between current events and epochs of history. As an example, I call your attention to the similarity of war fever being fanned by the governing elite here in the US against Iran and Syria to the similar policies of the German government during the decade of the 1930s.

In both instances we find a ruling elite presiding over crippling economic conditions. For reasons of political  survival  that elite must divert its citizens' attention from declining living standards as well as a concomitant disappearance of formerly existing liberty.

In the case of Germany, the population was propagandized to view its cultural brethren in neighboring nations as victimized and oppressed by evil tyrants and in need of "liberation".

Those were the purported conditions obtaining in the Sudeten region of Czechoslovakia, the Rhineland and Poland.  After remilitarizing the Rhineland in 1936, seizing the Sudetenland and the rest of Czechoslovakia in 1938-9, a false flag incident at Gleiwitz on the German side of its border with Poland was staged as the pretext for invading that hapless nation. We all know how that turned out. In the present instance think: Straits of Hormuz.

Fast forward to recent history and we observe the mass media/government spokespersons (a redundancy) obsessing over human rights violations committed by the Syrian dictator as well as the supposed efforts of a bellicose nutcase Iranian regime to develop nuclear weapons. Couple this with the administration's failed efforts to convince US citizens of the existence of an economic "recovery" and there exists the possible perfect storm of conditions necessary for the commencement of another "military action" in order to enable the current US regime to remain in power.

Given the likely choice of protagonists in the upcoming contest for the US imperial throne, this writer can envision a serious debate over which candidate can most effectively lead the nation during wartime.

May Random Chance*  guide and deliver us through these trying times.

*Hopefully you, dear reader, will forgive this somewhat esoteric allusion to God. No blasphemy is intended.
at 3:21 PM

As recounted at Hitler Comparisons, the efforts to shut down rational comparisons such as this yours, but (for now) only when made by people who have a large audience, are being stepped up well beyond mere mention of Godwin's Law.

In the case of Germany, the population was propagandized to view its cultural brethren in neighboring nations as victimized and oppressed by evil tyrants and in need of "liberation".

On the other hand, ethnic Germans really were being brutalized.

Some propaganda is true.