Late breaking news informs us that our esteemed Leader will "consult" with Congress when it reconvenes after the holiday weekend on how to proceed against Syria over that nation's alleged use of chemical weapons within its own borders.

"The chart is a spin-off of the most amazing letter to the editor ever written, which appeared in Thursday's Financial Times. It also explained the entire Middle East, in a few short sentences. Here they are:

Sir, Iran is backing Assad. Gulf states are against Assad!

But Gulf states are pro-Sisi! Which means they are against Muslim Brotherhood!

Iran is pro-Hamas, but Hamas is backing Muslim Brotherhood!

Obama is backing Muslim Brotherhood, yet Hamas is against the U.S.!

Welcome to the Middle East and have a nice day. 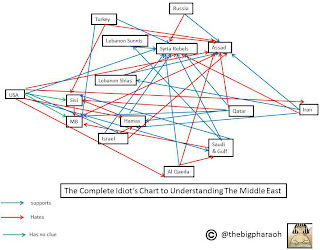