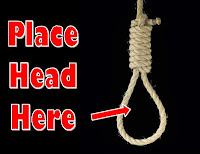 The details of the crimes committed by two Iranian Kurdish journalists have as yet not been released. It has however, been confirmed by the Iranian government that they have been sentenced to death by hanging for being "Enemies of God". Would that be the ancient Arab moon god now known as "Allah"?
Meanwhile here in the "west" one American citizen has been arrested on felony charges for the commission of a "hate" crime by placing books in a commode. He should have applied for a grant from the National Endowment for the "Arts" in order to qualify his acts for display at the Guggenheim Museum in the same city whose "police" force has arrested him. After all if disrespected religious icons such as "Piss Christ" and the dung decorated images of Christian saints are objects of "art", why not Korans in the toilet?
Oh forgive me. Only one religion is "protected" from "offense".
In any event, this is one court case that should be interesting; especially should it reach the purview of Justice Kennedy as he seems to be concerned with foreign (sharia?) jurisprudence as it applies to the United States.

Why does it always seem to be the same politicians (Kennedy, Shumer et al) that consistently push gun control who also advocate "hate" crimes? Do they wish the U.S. to go the way of Sweden?