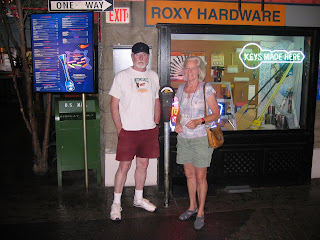 We spent 4 days in Las Vegas on the way to the left coast after visiting the Grand Canyon which has morphed into an urban cancer replete with super market and federal gestapo since our previous visit in 1991. The Las Vegas visit was an ordeal for anyone suffering from agoraphobia. It had been 20 years since visiting that "attraction" and things have really changed. The casinos formerly would provide nearly free or at least inexpensive meals to clients . Not any more. The prices for food and lodging are now very high and new mega hotel casinos are being erected at a frantic pace. The traffic problems in and around the city are at least as bad as the major metropolitan areas such as Atlanta or Los Angeles.

During our stay there the outside temperature reached 111 degrees at 5:00 pm making any out door activity virtually impossible. We noticed that lots of sparrow like birds were hanging around the grille areas of parked vehicles in the parking lots. Closer inspection revealed that they were feeding on the insects that had been impaled on the front parts of the radiator cooling fins as well as the windshields. They did not have to expend energy hunting for the insects that made up their diet but engaged in the symbiotic harvesting of food provided by the evil fosil fuelled conveyances of us high tech evil homo sapiens.

We have subsequently arriveded in the southern Kalifornia metro area where recent regulations require the installation of only flourescent lighting in the kitchen and bathroom areas of new construction and no vehicles are to be parked on "private" property for periods exceeding 72 hours.

Damn man! I expected someone OLDER! Look at that lean, mean fighting in the shade machine!

Have fun in "bizzaro world".