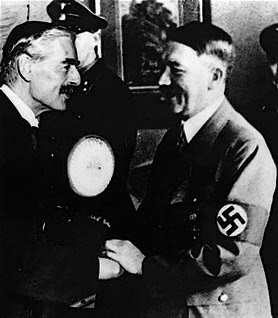 In the words of the great Yogi Berra it is deja vu all over again with regard to the up coming "peace conference" in Annapolis. Wasn't all of this unpleasantness disposed of in Oslo during August, 1993 ending the 6 year intifada with something called a "roadmap" to peace?

Although Israel complied with the better part of that agreement by granting substantial autonomy to the Arab population of Judea, Samaria and Gaza in recognizing the Palestinian Authority, the Arabs failed to carry out a single item in the terms of agreement. They failed to officially recognize Israel's right to exist as well as continuing to to imbue their population with a visceral anti semitism and hatred of the Israeli state. The result was the second intifada of 2000. To this day Both the Palestinian Authority led by Mr. Abbas as well as his terrorist rivals in Hamas pursue a policy of extinguishing the state of Israel.

The exhaustion of the Arabs in conducting their insurrection (intifada) led them to the negotiating table at Oslo in order to gain a respite after suffering over 1,100 casualties in the 6 years 1987-1993 and now they (Abbas) are sorely pressed in maintaining political power due to the rising influence of Hamas. Mr. Abbas wishes the United States to pull his chestnuts out of the fire in agreeing to come to the negotiating table with Mr. Olmert this year in Annapolis. Indeed, Abbas has received substantial military aid from the U.S. this last year. Much of that military aid was seized by Hamas in both Gaza as well as the West Bank and used by both factions to murder Israeli citizens.

The question comes to mind after observing the historical results of attempting to reach acceptable agreements by negotiating with sworn enemies: Have you learned nothing? The list of modern "statesmen" in search of a "legacy" beginning with Neville Chamberlain and continuing with Richard Nixon, Jimmy Carter and Bill Clinton is soon to include George Bush and Ehud Olmert.

Another question I would pose to those deluded politicians who seek the ephemera of a "middle east resolution" is: since when did "peace" become a process instead of a condition? As the old saw goes: "Fool me once, shame on you. Fool me twice (repeatedly?) shame on me."

Those deluded harpies of our recent experience who state "war never solved anything" have it just backwards. "A study of the history of mankind", observed Winston Churchill, "is the study of war". It sadly is the default condition of our species, unchanged by the best of intentions.

I'm with you, Leonidas, but give us a war where the ROE are:
1) Maximize Hostile casualties
2) Minimize Friendly and non-combatant casualties.

I'm getting a bit too long in the tooth, but I'd feel like re-upping.

You make it hurt bad enough, they surrender.

Then there is peace. Negotiate with Liars? Spare me.

Leonidas, thanks for your kind words. I'm quite rusty, but my response would be "close" to:

I'm not "quite" done, it seems with this one. Honor, I suppose, demands my chaste behaviour for the time being.

But Then? Ha, the Wollf shall hunt in joy.

Thanks for the comments. I found a jpeg in my "secret stash". Posted it in your Honor.

I just crack myself up.
Wollf