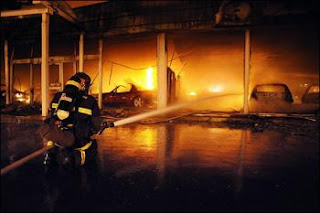 Fires are raging in the banlieue tonight. Two boys aged 15 and 16 riding on a [stolen] mini-motorcycle (prohibited on the road) hit a police car this afternoon in Villiers-le-Bel. The boys, who weren’t wearing helmets, were killed. Hundreds of enraged men and boys (what, no women in burkas?) are tearing up the neighborhood.

Le Parisien reports that they burned down a Peugeot dealership, sacked a train station and shops, tore up a McDonald’s, stole the day’s receipts and attacked customers, smashed and burned cars, and are still going strong. A police commissioner who tried to talk to the mob was attacked with iron rods; his face and skull are fractured. A police station was burned down, eight policemen and one firefighter were injured.

What are the chances these "youths" just happen to be affiliated with a certain "religion of peace"? Meanwhile several hundred new immigrants will enter France (mostly from North Africa) in the next month.
at 10:25 PM

And what are the chances the French will stop letting muslims into their country?

About the same as the U.S.

Oh, there you go again, ΛΕΟΝΙΔΑΣ,
profiling these pieceful peebles.

And for crying out loud, look on the bright side.....They're in France!!

You have to wonder when it will stop = and what it will take.

Hey, Fred, pogo, Wollf, and ΛΕΟΝΙΔΑΣ! All my favorite people!