Update To Politics of Flags 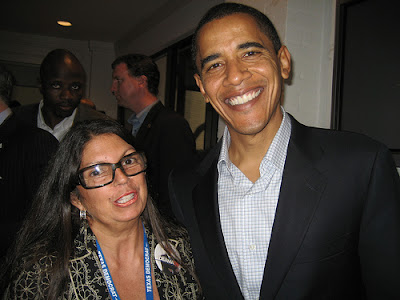 The Obama campaign "volunteer" in Houston, TX who is so enamored of the mass murderer Ernesto "Che" Guevara has been identified. Her name is Maria Isabel and an identical but larger flag displaying the Marxist revolutionary's image has been until recently prominently hung from the balcony of her apartment in Houston. We say "recently" as a field trip to that location by a local investigative blogger revealed the offensive flag had recently been replaced by a huge U.S. flag accompanied by a Houston police officer in an obvious effort to "discourage" the curious .

Senator Obama has attempted to evade responsibility for the prominent placing of the Cuban flag in the Houston campaign office. In view of the above photo of the senator with Ms Isabel, you be the judge.