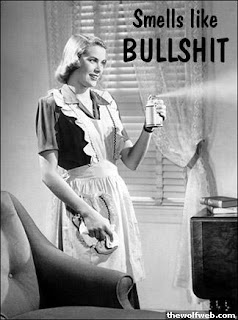 Herr Doktor Goebbels had it right when he stated that big lies are more readily believed than small ones and that any lie repeated often enough will eventually gain credibility with a large portion of the population. An example of this assertion is the widespread acceptance that "Bush lied the US into the invasion of Iraq". When pressed, the political enemies of Bush inevitably cite the failure of the Iraq invasion to reveal the existence of "weapons of mass destruction" in the arsenals of the Iraqi dictator. But this is a tortured definition of "lie" which is objectively defined as a statement by someone who knows it to be false e.g. "I never had sexual relations with that woman...". Mr. Bush in stating the widely held belief that Saddam possessed WMDs although mistaken, does not qualify as a lie in spite of the best efforts of his political enemies.

The use of the big lie continually repeated, is routinely utilized by the so called "environmentalist" movement, especially it's anthropogenic global warming (warmista) wing which has convinced a substantial portion of the world's population (especially the ruling elite) that climate change is caused by human economic activity. The assertion by the warmistas that increased governmental regulation is the solution to their alleged catastrophic scenario is settled science beyond further debate is absurd on its face in view of the many thousands of dissenting scientific minds. A clue to the mythical dimension of these allegations are the strenuous efforts to suppress and demonize dissenting or skeptical viewpoints.

Possibly the most egregious example of the emergence of the acceptance of a myth as fact is the now established belief that all "recycling" is always beneficial to the environment. This myth is so embedded in for example, Swedish culture as well as our own here in the US, that the mere questioning of it evokes shouts of "blasphemy" and the dismissal of anyone who utters it as beyond the pale. When, however one who has compared the energy and resources needed to recycle products as opposed to their production from naturally occurring resources and found such recycling to be a net energy and/or material loss, the tendency is to ignore or dismiss the results as being virtually sacrilegious. As a matter of fact, without substantial government subsidies and force, most recycling efforts would be exposed for the wastefulness in terms of human effort and energy that they are.

The people of Sweden are... forced to clean their trash before carefully separating different kinds of materials. This is the future, they say, and it is supposedly good for the environment. (What about the economy?) Imagine a whole population spending time and money cleaning their garbage and driving it around the neighborhood rather than working or investing in a productive market!

But it doesn't end with the extra work at home and the extra space in each and every kitchen occupied by a variety of trash bins. What do you do with the trash that isn't collected? The garbage collection service (which nowadays doesn't offer collection too often, usually biweekly or monthly, even though the rates mysteriously seem to be much higher than before) only accepts certain types of garbage, generally only biodegradable food leftovers. But do not worry; it is all taken care of.

The authorities have established trash collection centers in most neighborhoods where you get to throw away your trash. These "centers" offer numerous containers where you can throw away your trash — there is one container dedicated for each and every kind of trash and they are all neatly color-coded to help you find the right one. But this means you better have separated your aluminum from your other metals and your newspapers from your soft and hard papers before you get here. You wouldn't want to throw away dirty milk cartons, cans with paper labels or unsorted paper, would you?

But it seems people do just that: they cheat if they believe they are better off doing so. So the authorities have responded by making it more difficult to cheat. Their first measure was to redesign all containers so that it is more difficult throwing the "wrong" trash in them. For instance, containers for glass have only small, round holes where you put your bottles [one at a time!], and containers for hard paper and carton materials have only letter-slit shaped holes (you need to flatten all boxes before recycling — that's the law).

Well, that didn't do the trick. People kept on cheating. And the more difficult the authorities made it to cheat, the more difficult it was to get rid of the trash even if you intended to put it in the right place. So people went to these centers and simply put everything next to the containers instead — why bother? The authorities responded by appointing salaried "trash collection center spies" (!) to document who was cheating so that they could be brought to justice. (There have actually been a few court cases where people have been tried for not following recycling laws.)

Admittedly, the above Swedish example is extreme and the result of nearly 3 generations of socialism at work but is a view into the future for the rest of us should the march of collectivism continue unchecked. An excellent and entertaining video presentation on this subject by the comedy team of Penn and Teller in 3 parts is here , here and here.
at 9:48 PM

The criminalization of... well, EVERYTHING!

I cannot wait until carbon cap and trades come out and folks start getting fines for driving farther than their allotted amount per week. Repeat offenders could even get jail time! How exciting!

The leftists all think that Europe is so much more progressive and superior to the US, I'll bet that they are just about ready to burst with excitement from the rush of power being able to PUT ON TRIAL any person who does not recycle, conserve, reduce, reuse or whatever else, the way they see fit. And don't kid yourself, that is what this is all about... POWER. Not saving the earth, because if it really was, then truths like the inefficiency of recycling, the high environmental cost of hybrid vehicles, and about a million other examples that I can offer up, would be steering the movement, not draconian regulations and spy networks to ensure compliance.

Slowly, surely, our rights erode before our very eyes, and all of this happens, not amid protest, but amidst cheers and jubilation.

In the act of "saving" the earth, we are not only failing to accomplish the stated goal, but we are also destroying ourselves.

goober,
It's gone even farther than you think Just read this by a climatologist from MIT. Hope you enjoyed the videos :o)

Excellent article, thanks for the link.

I am sort of a self-styled "expert" (using the term very loosely!) in the whole anthropogenic global warming racket, so I have a pretty good handle on what is really happening.

This is merely a different track towards wealth redistribution, social "justice" (if it were really justice, it wouldn't need the adjective!), and all the other bull-hockey that the leftists have dicovered that they cannot get on the face of it because no one buys into it. So, they have latched onto the environment, and more specifically, AGW, to use as a tool to get folks to (unwittingly) rally around them and their cause.

There is no other way around it. The reasoning behind my suspicion is not hard to understand. They are asking for draconian measures, for a huge shift towards socialism, a one world government, and a life of austerity for the entire developed world simply to staunch development. Not to save the world.

The arrogance to think that you can CONTROL THE CLIMATE...

To find coorelations where none exist between CO2 and global average temperature (which is itself a laughable idea... "average" temperature of a chaotic, non-linear system.. pshaw...)

Even in recent times, temp started rising in the late 1800's. CO2 did not start to rise measurably until the 1930's. As CO2 started to rise, temps dropped precipitously from about 1938 to 1976. All while CO2 continued to rise. Then, from 1976 to 2000, there was a period where CO2 and temps were both rising together. THIS is the period that the greens look at to tout their coorelation. However, since the temps have stabilized since 2000, (ie, have not gone up!) you will never hear them talk about the last 8 years! the reason? CO2 kept going up, but temps stopped.

The purposely deny the science, not because the globe is actually warming, but because THEY WANT IT TO BE SO BADLY that they refuse to see the light. They want it because it is the only way that they can get what they want, as described above.

I have coined a term over on aonther blog that I post on regularly, and the term is "eco-munchausens-by-proxy". M-B-P is a disease where a subject will purposely cause to be ill someone that is under their control or care, such as a child or elderly parent/grandparent, etc, so that they can get the sympathy, respect, whatever out of being their martyr caretaker.

By using computer models to create lies about our globe, these folks are using E-M-B-P to create problems with the globe that do not exist so that they can be the "eco-martyrs" of the new green religion.

Since they all seem to be leftists, they see the fix to all of these problems in socialism. Green on the outside, red on the inside. Watermelons. So that is where they head with us. Socialism could not be sold to us at face value, so they are trying to sneak it in unde the auspices of "saving" the world.