Musings From Beyond the Crab Nebula...

...Or; how we spent our Saturday morning.

We were up bright and early (07:45 will pass for such on a December weekend at Lacedaemon) and out for a chilly drive to the "Largest gun show in the South" which should more precisely be characterized as an 80,000 square foot candy store for us "good ol' boys". This would include a native California political refugee and Mrs. ΛΕΟΝΙΔΑΣ who is a Swedish national. The facility did not officially open until 09:00 hrs. and when we arrived at 09:10 hrs. the 50 acre parking lot was about 20% full (lots of pickups and SUVs) and the queue to enter the building which included an ethnic representation of the local population including a few wearing Obama for president regalia extended about 200 feet but was moving steadily. 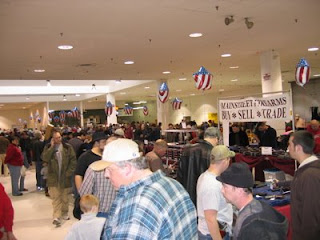 Early in the show

Once inside the building, a tentative survey of some of the 2000 display tables whose exhibitors were already doing a somewhat brisk business revealed that mere possession of approximately 75% of the items being openly exchanged here could get the ordinary otherwise law abiding California citizen arrested and convicted of a felony in most cases and at the very least a plea bargain down to a serious misdemeanor. 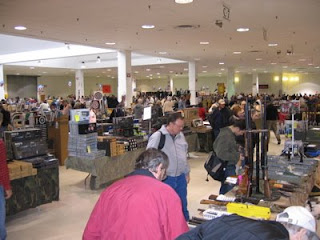 The paradox here is puzzling indeed. A comparison of the firearm related crime rate between California and Georgia would indicate that on a per capita basis there is considerably less blood flowing in the streets of Georgia than in California . This is in spite of the legal presence of "assault weapons", high capacity ammunition magazines, flash hiders, bayonet lugs and pistol grips on semi automatic rifles and shotguns as well as private owners of firearms enjoying the right to give, sell or trade their property to relatives, neighbors or, allah forfend, willing strangers, without the permission and payment of fees to the state. 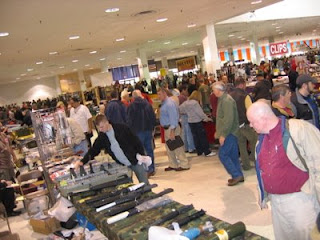 By 11:00 hrs. the crowd was shoulder to shoulder

I stumbled upon Aristotle's Physics today, in Greek, online, and thought of you.