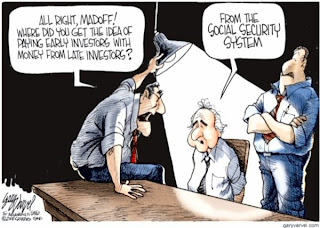 A few decades ago Ponzi schemes were all the rage. Chain letters and multi level marketing "business models" were common, every day scams victimizing unwary members of the population. The chain letter and pyramid cons for the most part involved only minimal sums of cash and one or two times being suckered usually sufficed to dissuade those with IQs above room temperature from further cash hemorrhages. Leave it to the government however to get in on the action big time and use its monopoly on the use of force to ramp up the boodle. Any of you gentle readers residing in the US not participating in the present "Social Security" Ponzi scheme program are doubtless either living the jungle rain forest life described by Thomas Hobbes: "Solitary, poor, nasty, brutish and short" or more likely, in hiding.

Gary North posits an interesting concept relative to the parallels between the equity markets as they have operated during the last few decades and traditional Ponzi schemes:

Every system of investing that does not rely on the actual increase in productivity of the businesses being invested in to pay off all debts, whether bonds, certificates of deposit, or retirement dreams of long-term holders of the company's stock, is a Ponzi scheme. It can be a government Ponzi scheme, such as Social Security or Medicare. It can be a Ponzi scheme by a state or local government, which promises enormous retirement benefits to state employees. It can also be a no-load mutual stock index fund. Ponzi schemes all have the same thing in common: future productivity will not repay the investors with sufficient money of constant or increasing purchasing power for the investors to achieve their goals. The investors have retirement goals which will be impossible to achieve by means of the investment strategies recommended by the experts. Investors believe the nonsense, and apparently their advisers believe it, too. Politicians get elected in terms of this nonsense. But it is nonetheless nonsense.

North cites the myth swallowed hook line and sinker by the progressive Keynesian economists and consequently most of our current political rulers leaders succinctly thus:

To tell American consumers that they can improve the productivity of the economy merely by going out and spending money is... [Keynesian] nonsense. The only way to increase the productivity of the economy is through thrift. The money generated by this thrift must then be invested wisely, in terms of future conditions, so that the company or fund making the investment can reap a profit. If [the] economy cannot do this through increased productivity, it will eventually find itself incapable of raising additional capital. Without additional capital, there can be no increase in productivity

If society simply spends and neglects to save, there are no savings to be invested in increasing productivity; and borrowing to engage in the spending (which is the current economic policy of governments) can only compound the problem.

The Great Depression of the 1930s was initially a recession exacerbated and lengthened by the very governmental actions that today are touted as the cure. Recessions are the cure for the conditions caused by the inefficient, misallocation of capital. We are about to suffer the consequences of government's attempts to avoid the political short term consequences of a normal correction. It will be interesting to hear the future recriminations offered up by the political class to escape the consequences of these follies.
at 3:05 PM