"As California Goes, So Goes the Nation"? 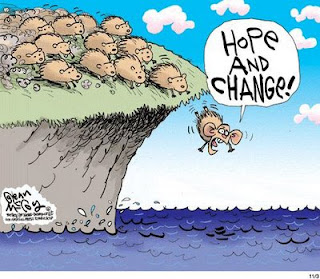 Graphic shamelessly stolen from GatewayPundit
In spite of the "green shoots" referred to by Federal Reserve Chairman Ben Bernanke, our government politicians appear determined to nip any signs of economic recovery in the bud.

Americans currently import 30 percent of their energy – a luxury they can no longer afford. This 30 percent is not made in America because the gradual increase of government taxation, regulation and sponsorship of litigation against American energy industries over the past 40 years has created a business environment in the United States that is very unfavorable for the production of energy.
So, even though the United States is awash in plentiful nuclear resources and coal, oil, natural gas and other hydrocarbon resources, most new energy production is instead sited abroad.
Now, Congress and the Obama administration are pushing a new "energy bill" including so-called "cap-and-trade" that will sharply increase taxation and regulation of the energy industries. To sell this greatly increased suppression of free enterprise, Washington politicians are advertising boutique energy technologies like solar and wind, without mentioning that these methods produce very small amounts of energy at very high costs. These costs are so high that they not only require enormous taxpayer subsidies, but also cannot be financed in sufficient quantity to avoid energy shortages, high energy prices and, ultimately, rationing and diminished prosperity.

Nowhere is this insanity more apparent than in California.

[California governor] Schwarzenegger: ("Our wallet is empty.
Our bank is closed. And our credit is dried up.”) is proposing laying off 5,000 state employees, as well as slashing education and social welfare programs. But the University of California Los Angeles "Anderson Forecast projects that Schwarzenegger’s budget cuts will eventually result in 64,000 job cuts from state government plus countless private-sector and local government jobs."

No word as yet as to whether the California sea otter research and gang member tattoo removal programs are to be effected by the state's "draconian cuts". Also apparently off the table are the multi billion dollar oil and gas leases of state controlled offshore and onshore reserves.

One wonders when the California politicians will be begging Washington for the temporary loan of its printing presses to engage in their own "quantitative easing".
at 3:33 PM

without energy, western civilzation stops in it's tracks. back to the pre-industrial era, except for 'special' government run corruptocracies.