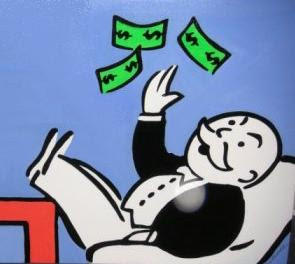 Long time followers of this blogster's rantings understand that ΛΕΟΝΙΔΑΣ has so many miles on his old carcass that he is often able to weave personal experiences into some of the events and issues emerging in what passes for todays media. On the other hand a few casual observers have cast doubts as to his veracity; C'est la vie.

Many years ago ΛΕΟΝΙΔΑΣ' family was involved in the "oil patch" in California. To illustrate just how long ago we are referencing, suffice it to say that the highest quality (26 gravity) crude oil was trading at $3.60 per barrel. At that time there were active in the "business" what we called "promoters". These individuals would buy or, in most cases, lease land in areas believed to be potentially oil producing. In order to raise the capital required to drill for and produce crude oil they would form corporations or partnerships. The resulting "wildcating" more often than not produced a "dry hole" and the promoter who lived for several months/years off the capital raised would go belly up and move on to the next project.

One such individual was apparently careless in drawing up a partnership agreement and wound up serving time as a guest at the California Men's Colony in San Luis Obispo. It seems that the ownership percentages of the several partners in his firm totaled something over 120%. This is a definite no no for ordinary citizens as such activity is reserved exclusively for governments and their "licensees" in the banking business.

The only similar fraud that is perpetrated without penalty is the banking industry which operates under license from the government. The government allows banks to accept deposits, lend out 90%+ of the funds while depositors still "own" 100% of their deposit. At the same time, the borrowers of the "money" have leased the same funds subject to their loan contract which in old days could be "called in" by the bank if too many depositors demanded the cash to which they were entitled. This is called fractional reserve banking and has been engaged in since medieval times in Europe when goldsmiths issued receipts for more gold than they kept in storage. Often these goldsmiths when discovered committing this fraud were dealt with severely by the local prince. That is, until 1694 when the English crown, William III decided to be cut in on the action and issued a charter (license to commit fraud) to the Bank of England. Since then most governments have decided it is a dandy way to augment tax revenue in order to finance wars, welfare and other grandiose perks.

This was the manner in which bankers were able to create money from nothing during the era of the gold standard. At least most depositors could redeem the "receipts" for their cash (gold or silver) unless word got out that the bank had issued more receipts than it had precious metal on deposit. When this unfortunate event occurred, there would be a run on the bank and it would be in deep doo doo. Hence the origin of the term "bankrupt".

Fairly early in the twentieth century (1934) the banksters were successful in convincing the US government to assist them in the elimination of the inconveniences associated with too many depositors demanding their cash simultaneously (bank runs) and gold was also withdrawn from circulation with Federal Reserve notes being substituted. Voilá; enter the FDIC (Federal Deposit Insurance Corp which is now more or less insolvent). This whole convoluted scheme worked moderately well as long as the counterfeiters Fed did not overprint notes and confined the money expansion (inflation) to under 3% per annum. The seeds of the serious problems we are experiencing today were sown when the need arose to finance various foreign adventures (wars) and the welfare state.

Much more detailed and intellectual explanations of these events are contained here and here as well as that by my esteemed colleague Scott Angell here.

In any event, I hope to have provided at least a modicum of insight (as well as amusement) into the criminal class known as government and how it compares to the private variety.

Update: 1037 hrs EDT 10/10/09 A mere few hours after this essay was posted, Gary North published part V in his series entitled "What is Money?" here. For a more detailed and scholarly exposition on the subject of fractional reserve banking and government counterfeiting you are urged to read it.