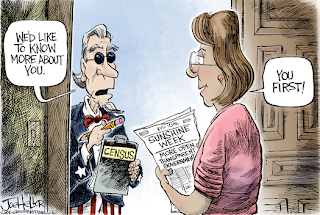 The following is a blog posting by Dr. Walter Block lifted from here. Obviously this message needs maximum exposure:

I pass this along [sic] letter on the census for your information, only. I do not counsel anyone to break the law. Of course, I’m not real sure of what the law is. A direct and literal reading of the U.S. Constitution it seems to me, a non lawyer, is clear as to what the law is: people are legally obligated, only, to cooperate in a head count for political representation purposes. But, my fear, my expectation, even, is that present courts will not interpret the law in that way, and may instead punish census rebels who refuse to furnish additional required (requested?) information. In any case, the following will undoubtedly be of interest to all people concerned with liberty; I offer it exactly as it was sent to me:

My response to the Census

I compiled this letter and inserted it into the Census envelope, along with my 2010 census form.
I marked off that ‘02′ people reside at this address….and, well… read the rest!

To Whom it May Concern,

Pursuant to Article I, Section 2, Clause 3 of the Constitution, the only information you are empowered to request is the total number of occupants at this address. My “name, sex, age, date of birth, race, ethnicity, telephone number, relationship and housing tenure” have absolutely nothing to do with apportioning direct taxes or determining the number of representatives in the House of Representatives. Therefore, neither Congress nor the Census Bureau have the constitutional authority to make that information request a component of the enumeration outlined in Article I, Section 2, Clause 3. In addition, I cannot be subject to a fine for basing my conduct on the Constitution because that document trumps laws passed by Congress.

“Neither branch of the legislative department [House of Representatives or Senate], still less any merely administrative body [such as the Census Bureau], established by congress, possesses, or can be invested with, a general power of making inquiry into the private affairs of the citizen. Kilbourn v. Thompson, 103 U.S. 168, 190. We said in Boyd v. U.S., 116 U. S. 616, 630, 6 Sup. Ct. 524,―and it cannot be too often repeated,―that the principles that embody the essence of constitutional liberty and security forbid all invasions on the part of government and it’s employees of the sanctity of a man’s home and the privacies of his life. As said by Mr. Justice Field in Re Pacific Ry. Commission, 32 Fed. 241, 250, ‘of all the rights of the citizen, few are of greater importance or more essential to his peace and happiness than the right of personal security, and that involves, not merely protection of his person from assault, but exemption of his private affairs, books, and papers from inspection and scrutiny of others. Without the enjoyment of this right, all others would lose half their value.’”

A Citizen of the United States of America

cross posted at: Eternity Road
at 9:38 AM

Great thing to know! thanks for passing it along!

A federal court in Yeager v. Hackensack NJ, 615 F.Supp 1088 citing the authority of Roe v. Wade, confirmed that “Right to be free from compelled disclosure of names of household members is within right of privacy protected by Constitution.”

More information about Census Protests is on www.notfooledbygovernment.com/census.htm