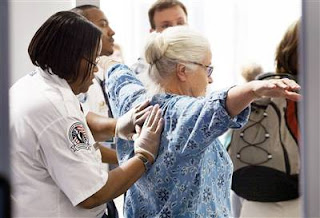 A TSA worker pats down a traveler at O'Hare International Airport in Chicago on Sept. 22, the day the government introduced stricter security measures.

"The right of the people to be secure in their persons, houses, papers, and effects, against unreasonable searches and seizures, shall not be violated, and no warrants shall issue, but upon probable cause, supported by oath or affirmation, and particularly describing the place to be searched, and the persons or things to be seized." Fourth Amendment to the Constitution of the United States of America.

We now live in a society where the arrest of 9 "christian militia" nutcases who are most likely the hapless victims of a government agent provocateur garners above the fold front page media coverage while suicide bombers in Moscow who murder scores are relegated to a page 4 report that fails to even hint at their religious affiliation.

Hand is waving in the air over here, Boss. Did you see "Your" idiot Congress Critter and the "Tipping Island" money quote?

Up at my place

I hear you wollf but Johnson is NOT our congresscritter. Our congresscritter is David Scott of the 13th district. He does however appear to be the soulmate of Johnson. Johnson can however be allowed some slack as he has long suffered from hepatitis III. Scott has no such excuse.

I should be able to provide a picture to one-up this one next time I fly. When I fly in a blue state, to the exclusion of Michigan's Detroit International Airport, I fly in civilian attire. If I don't, I get to go through the 'special' search line. The looks of fellow passengers as a uniformed soldier gets thoroughly searched (I always refuse to be taken aside, preferring to stand in full view of the public) seem to vary between bemusement and anger.

Steven, you can count me in the Outraged and anger group.
Semper Fi