The Politics of Flags 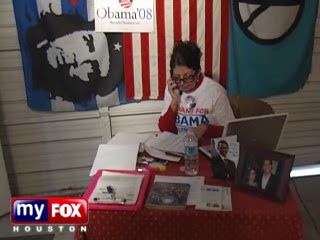 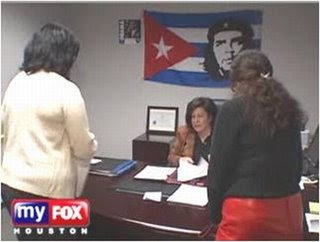 I for one seem to remember recent flaps over the display of the Confederate battle flag as part of various southern state flags. It fact protests against such displays by leftists ignorant of history resulted in the recent removal of the "stars and bars" from the Georgia state flag by order of the Republican governor Sonny Purdue. Imagine the outcry if the Confederate flag were prominently and proudly displayed in the office of a Republican candidate for high office such as Mr Huckabee or Mr McCain.

It would appear that the display of the Cuban flag replete with the countenance of the mass murderer Ernesto "Che" Guevara is no big deal when given a prominent place in the campaign office of the Democratic candidate for president (Barak Hussein Obama) who promises "change"and incidentally refuses to wear a US flag pin on his lapel. One can only hope that such "change" is not accomplished by Ernesto's tool of choice which was the projectile from a Colt model 1911 .45cal semi auto pistol applied to the back of a political opponent's head.
at 10:09 PM

You have got to be kidding me. the likeness of a murderous, cowardly scoundrel hanging in his campaign office, with no american flag to be seen except for in between Cuba and Che.

A man who will not respect the pledge of allegiance and will not display the flag of these United States should not be president.

I am just shocked at how many people are willing to vote for him when:

A.) No one seems to have any clue whatsoever who he is and what he stands for;

B.) He has not taken any time at all to TELL us who he is or what he stands for, because he speaks in vague generalities and in ethereal talking points.

Yet there are a lot of people that are voting for him, a man who is essentially a total unknown to all of us, a man with an Islamic background and name, who hangs pictures of a murderous revolutionary in his campaign offices, and goes to a RADICAL rascist church. They are voting for him, and by God, they may just get him. i hope when they do that they are not shocked when they find out who he really is, because that will be a scary day for all of us.

Obama did not hang those flags in the Houston campaign volunteers office. It does however indicate to us what sort of supporters he has and that his staff has not rectified the situation by condemning the outrage.

Understood. However, silence is a tacit edorsement