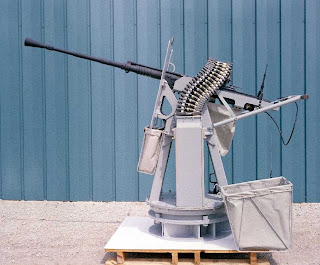 As is often the case, political considerations generally outweigh logic or reason in addressing what would ordinarily appear as simple and straightforward problems in the real world. As an example, the idea never occurs to our rulers when faced with criminal behavior to preclude the need for cost ineffective responses to criminal behavior by nipping the problem in the bud.

A case in point would be the recent resurgence of piracy in the Gulf of Aden and the Somali coast of the Indian Ocean. The coastal population of Somalia which at present has no effective government whose writ extends beyond the city limits of Mogadishu has discovered the lucre available to adventurous and enterprising gentlemen in small craft willing to invest in automatic small arms and readily available rocket propelled grenade launchers for the purpose of wreaking havoc on the unarmed merchant fleets of the world by seizing and holding for ransom peaceful merchant vessels and their crews.

The policy heretofore utilized by the shippers has been to pay the demanded ransoms to obtain the release of the vessels and personnel apparently ignoring the logic that any behavior which is rewarded will tend to increase exponentially. These decisions are also influenced by the political policies of various nations who prohibit the entrance of commercial vessels into their harbors vessels which have defensive weaponry on board. This situation is reenforced by insuring companies which will not insure vessels which sail with defensive armament.

As we have witnessed the increase in piracy recently due to the easy lucre engendered by the above mentioned policies, a re evaluation of such policies is obviously appropriate. Presently, elements of a dozen navies are engaged in the suppression of piracy in the western Indian ocean at considerable expense of treasure in a world economy suffering from the evaporation of over 50 trillion dollars of wealth over recent history.

Your humble writer is thus prepared to place before your consideration a proposal which he posits will address the problem in a cost effective and expeditious manner.

Every vessel entering the Gulf of Aden and the western Indian Ocean shall be equipped with the following: one 20mm chain gun with adequate ammunition on the highest point of the superstructure. This weapon to be serviced by one squad (9 persons) of trained private security personnel armed with appropriate small arms. The 9 man squad is adequate to provide 24-7 duty for the weapon system. All craft constituting a security threat to the vessel will be dealt with by the appropriate measures and no rescue operations will be initiated for surviving attackers.

You, dear readers are left with the necessary computation of the costs of these measures as opposed to the existing policy of deploying naval battle groups of a dozen nations and providing monetary rewards to these enterprising bandits.

US Bushmaster is a better gun, does not need 9 people. Get 2, one for'd.
http://www.naval-technology.com/features/feature_images/feature1670/1-weapon-systems.jpg

You are right 12:57PM the Bushmaster is a better gun, although some might argue that 16" projectiles from Iowa class battleships against Somali coastal villages might be more effective. I suggested the outdated 20mm version as more cost effective and easily available than the 25 and 30mm later versions. As for the 9 man personnel requirement both versions are served by a single gunner. The squad deployment envisions spotters and ammo servers on a 24-7 basis.