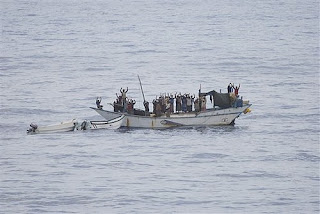 In 1986 your humble correspondent happened to be aboard his sloop anchored in the harbor of Charlotte Amalie in the US Virgin Island of St Thomas when a Dutch submarine docked and the crew mustered on deck for shore leave. As a former member of the US Army I was appalled at the appearance of the crew which resembled nothing so much as the enkempt denizens on the streets of Nancy Pelosi's congressional district of Haight Ashbury in San Francisco. These sailors proceeded to disembark to enjoy shore liberty. I learned from a cruising colleague of Canadian citizenship and Dutch descent that the members of the Dutch military are all unionized (do they vote on whether to defend the Netherlands from attack?).
I therefore was able to put the following news item in perspective:

In the above photo taken Saturday, April 18, 2009, released by Dutch defense ministry on April 21, 2009, Dutch marines board a fishing boat in the Gulf of Aden and free two dozen Yemenis from the clutches of nine pirates. They seized and destroyed AK-47 assault rifles and a rocket launcher but then put the pirates back in their skiff and set them free. (AP Photo/ Defense Ministry Netherlands/) (AP / April 18, 2009)

What possible thought process could have occured to cause anyone, even a dyed in the wool liberal convinced that social pressures made them not responsible for their actions, to set them free?

Even IF it is somehow someone else's fault that they took up arms (which I don't buy, just making argument for it's own sake) the fact reamins that they made a conscious decision to take up arms, which makes them dangerous, and until the situation changes, they should not be set free!

How hard is that to imagine? At what point in time do we punish the dutch for being stupid?