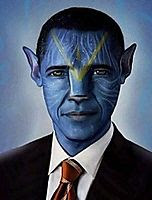 Readers of this blog are obviously capable of noting the discernable and increasing interval between recent postings. I should probably apologize to both of you but in lieu of such an apology I will merely offer an explanation. Simply put, the old Spartan's outrage meter has required several recalibrations. Should either of you choose to reject such a lame "excuse" I invite you to suspend contributing to the lucre that these efforts have directed to the House of ΑΓΙΣ.


As a clue to the main concern of this formerly fearless blogster he will offer up the following laconic quote from a sadly anonymous but eloquent source:


“The danger to America is not Barack Obama but a citizenry capable of entrusting a man like him with the presidency. It will be easier to limit and undo the follies of an Obama presidency than to restore the necessary common sense and good judgment to a depraved electorate willing to have such a man for their president. The problem is much deeper and far more serious than Mr. Obama, who is a mere symptom of what ails us. Blaming the prince of the fools should not blind anyone to the vast confederacy of fools that made him their prince. The republic can survive a Barack Obama, who is, after all, merely a fool. It is less likely to survive a multitude of fools such as those who made him their president.” -- Author Unknown


For additional insight I invite the curious reader/scholar to consider the Cloward-Piven Strategy  as it relates to recent developments in the "western" world.

I'm glad that this unknown author elucidated that which I've been saying all along - it isn't the policies of Barack Obama that I fear, for those can be undone. No, it is the fact that he was elected amid thundering cheers, fainting groupies, and a fawning, swooning press, when, in fact, he is clearly a horrible choice for president. The people could not see that. They were blinded by celebrity to the point to where massive, politically fatal character flaws (and proofs, which clearly would have scuttled the campaign of any other pol, including a democrat) were ignored or drowned out with cries of RACISM!!! We elected a socialist chicago mobster to president - and did so without even realizing that he was such a man.

When a man tells you who he is, listen - Maya Angelou

52% of the American voting public is too simple-minded to even follow that very sage advice. Obama showed us who he is, over and over again. 52% of us didn't listen.

I'm afraid of that more than i am of Obama's policies. They are proving to be exactly what I knew they would be, exactly what HE SAID over and over again that they would be, and yet, despite that, people still act surprised when the turd sandwich shows up at their place setting at the table...

they fail to realize one important point:

HE told us what he planned to do! HE WARNED US! 52% of us didn't listen, and substituted their own reality and voted for him anyway.

That is what should scare the bejeesus out of you. Obama is just a man, but his acendency to president is symbolic of a more troubling malignancy in our nation - we've become a nation of easily-duped fools