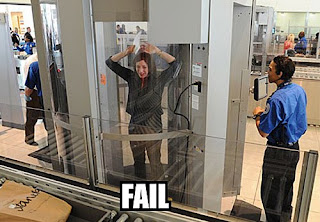 In one of his previous lives (the law enforcement one) your humble blogster participated in several "covert" operations. That is the main reason that he finds the saga of the underwear bomber of Christmas day especially intriguing.

As "luck" would have it and much to the chagrin of our political masters, a material witness to the events concerning flight 253 happened to be an individual trained in both logic and evidence evaluation. Unless this witness can be either discredited or intimidated into silence, the entire bureaucratic farce designated "transportation security" and erected by the government will stand revealed for the sham that in fact it is.

The witness, an attorney by the name of Kurt Haskell who was a passenger aboard flight 253 avails himself of his legal training in opening his "case" by posing seven questions :


3. Was it intended that the bomb explode?


4. Did the U.S. Government know that Mutallab had a bomb when it allowed him to board Flight 253?

5. Why is the U.S. Government seeking a plea deal for Mutallab?

6. Why did a fellow passenger call me to discuss changing my story?

7. Why are the important questions being ignored by the mainstream media?

I hope that you, dear reader, will follow Mr. Haskell's discussion of these seven questions at the link provided above and supply your reactions in the comments at the end of this post.

Public perception of the workings of covert government operations have been severely distorted by the entertainment media. In other words: what one views on the entertaining episodes of "24" is so far from reality as to enter the realm of the absurd. In the real world and almost universally, those charged with supervising these operations have little to no hands on experience working "under cover". The skills required of successful operatives are not necessarily congruent with supervisory abilities. The "bosses" have been promoted/appointed/elected into their supervisory positions on the basis of a variation of the Peter Principal  which rewards those skilled in sycophancy and bureaucratic political maneuvering. The "supervisors" almost invariably experience difficulty in managing the often complicated operations. These difficulties arise chiefly from an inability to resist tendencies toward micro management. Political corruption is also an occasional factor. First hand examples of this theory will doubtless supply subject matter for future posts.

In classic Platonic fashion, Mr. Haskell discusses the implications of the possible answers  to his seven questions and invites us to; (using an overworked cliche) "connect the dots". Suddenly, Ms Napolitano's apparently nonsensical statement that "the system worked" acquires the ring of perverse if partial truth.

In any event, the concept that ultimate transportation security can be achieved if only we surrender more liberty is revealed for the nonsensical fairy tale it has always been.

Leonidas, there is a typo in your link. It does not end with a "/"

Thanks anon. Fixed it.

I came to your blog from my blog. Someone searched 'violation of a restraining order', and supposedly found my blog from that. I entered the terms and missed finding my blog. I found yours. I went around to the front and I see that you are still posting. Now there's some text here.

You're already using "fail"; if I may: an internet culture word. I don't do that. I become totally immersed. I want my language to turn into that, seamlessly. But, until that day, I am a grammar nazi, or, that's what they call it.

I figure, "What's important?", and, I have told you something; it's about a TRO. But, TROs don't mean too much to either of us, I venture to say.

I am just going to try it, at the risk of being labeled a troll. Having said that, what does one do, when this is knowing? What do these details mean with people on opposite sides of the issues?

History is school shootings, butthurt fags, doing it for the lulz, trolling in real life, ending in a pressure-cooker environment when the overworked "victim" of an internet hate campaign goes on a shooting spree. And, that's the truth.

If you tell the truth, why do you have a shotgun shell pointed vertically, but also in the man's hand? How is vertical harmless? I hear you. You are saying that you didn't plant the so-called booby trap. I believe you, unless you'd care to confess.

Good, anyway, I was curious what age you were. I'm 57. You have this discretion going for you, where, a former LEO doesn't disclose the info so that bangers can't come seeking revenge, amirite?

Hmm, so, this is the problem of meshing interests online without causing a ruckus. I wrote that. I'm out.

Stephen,
Thanks for stopping by.
1. The url you posted (http//sbillinghurst.wordpress.com) takes me to a wiki page on hypertext transfer protocol. ???

2. The word "fail" was embedded in the graphic I selected. It seems appropriate.

3. The TRO reference does not seem to fit with this post.

4. The gist of your paragraphs 4 and 5 escape me. Academic but irrelevant

5. The sole purpose of the blank shotgun shell is as an audible alert. The device is NOT a "booby trap".

Sorry!
Here's the copypasta:
http://sbillinghurst.wordpress.com/
Hey, no, Leo, it, is, ...(I have memory impairment), ...ah. It. That's---(Next, Steve), going to be, umm, FAIL is a no, I think, because (and by now I have read the whole one with Humboldt in it, see. On 2-2-10, an average day, we are less likely to find a superior and remarkable post like that:
http://fightingintheshade.blogspot.com/2006/03/true-california-horror-story.html), amirite?

I mean, the "appropriate" thing. These kids are picking up hundreds of points in this game to your handful. That's an image macro, and they have "old media" ones. They probably don't make 'em like that any more. The phrase, "you are fail" has to be in there, and you have to be referring to the one we all know, the meme, and that says, "FAL, but for one letter it's fail (picture of a gun)". It is to laugh, and the typos get incorporated. You have a typo still in the other post. You must have gotten excited during the retelling. You can't have a .375 magnum.

No, but, the label of 'retard' or 'batshit insane', I mean, as a felon, I apologize. I wasn't going with the program. I am a hater. But, on the "irrelevant to the current post", can't you refrain a touch? Getting locked up is, in the long run, being eliminated by a power structure with very little to be proud of, and, you can tell that since it does not post good information ahead of time; it's reactionary---umm, with the internet here we can tell that sort of thing.

I did drugs with a high school student who is now a cop, ready to retire. Damage control is not treating the democracy seriously. Cops have a code of silence. I don't want to let even one slide. But, I am. Now, you take the due process in the hiring process and you ask how corruption is institutionalized, and there are answers to that question.

None of this stuff's fair. I had to come to the front or be buried deep in two-years-ago's posts. Let's face it: Flt 253 got away light. We're working on plane crashes yet to come.

But thanks for the warm welcome. It is appreciated. I blew it a little bit, too, just there. Did you see what I did there? Okay.

Paragraphs 4 & 5 are a sampling of the internet philosophy of "Anonymous", a trolling group, which "does it for the lulz", and I am steeped in it from having just messed my own mind up by reading too much Encyclopedia Dramatica; this is not to be missed. You have LOL, begatting ROFL, LMAO, LMFAO, the suffix -VIA, and unless it hyperlinks it doesn't rise to the critical level of "entertainment". You might find yourself stuck and puzzled by many insider jokes. You don't have to. Just relearn; I think it's "vacationing in Australia". You can actually read LOLROFLMAOVIA, and that isn't gibberish (the upward-abstract to "not sure what that means"). This laughing is doubled-over laughing.

If you are offended, that blog is, "How to Make Methamphetamine".

The FAIL meme is overused.

ΛΕΟΝΙΔΑΣ.....My apologies. I had a cogent thought but somehow lost it in a forest of incomprehension, amirong?