Evil But Not Stupid 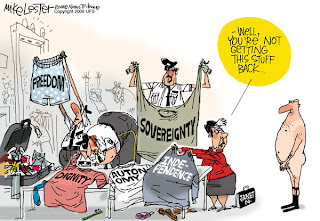 On one of the busiest traveling days of the year there were no reports of disruptions at any of the airports caused by travelers "opting out" of being irradiated and thus "requiring" to be groped and fondled by the TSA gestapo perverts.

Gee. Do any of you gentle readers now understand that the major reasons for implementing the recent procedures were not really to improve "security" but only to create the illusion of increased safety while enriching special interests and encouraging us to surrender more of our liberties to the all powerful government?

As for this aging Spartan, he will resume domestic commercial flights when he is not denied his right of self defense against criminals and terrorists while hurtling through the troposphere in an aluminum tube.

From Pete Blome on the TSA

As this is not cited as an official Libertarian Party of Florida communication, I will take this as a personal transmission, albeit with a request for wide distribution.
Consider it distributed.
All 22 quotes are attributed.
Are we going to sit for this?  If we are, then we're no longer citizens.  We're cattle, and the stun gun is right around the corner.  Mark my words.

They Still Do not Get It

All members of Congress and Administration officials with a security detail are EXEMPT from the jail booking procedures forced on ordinary law abiding citizens who must fly commercial air lines.

In other words: the crooks are exempt from scrutiny while the rest of us must prove our innocence. Such irony! 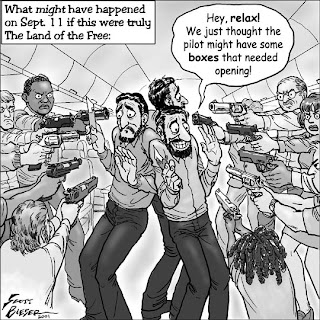 It has been nearly a decade since Leonidas has refused to travel by commercial air. It happened one day in 2000 when an airline declined to allow him to board a flight from Eureka, California to Los Angeles while in possession of his legally permitted Smith & Wesson .357 Magnum revolver.

He relented one time in 2007 at the entreaty of Mrs. Leonidas for a flight to Antigua in the Caribbean and was only prevented from decking a surly and arrogant Walmart reject TSA "officer" in San Juan, Puerto Rico by his better judgement.

Since that time "alternate" modes of travel have been chosen and it now appears the idea is gaining traction.

THIS IS A NATIONAL BOYCOTT CALL. 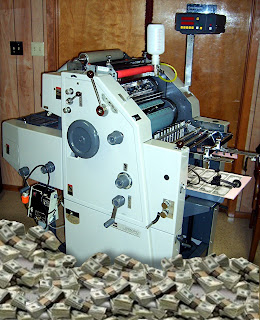 Well sports fans, on successive days just past both shoes have fallen: Yesterday the election of the 112th Congress and today the Federal Reserve meeting to "officially" announce the fresh creation from thin air, of at least $600 billion in brand new banknotes.

Make no mistake, the $600 billion is merely the down payment on what the cultural Marxists characterize as "quantitative easing 2". Since the federal leviathan and its agents produce no product and few services that we serfs are willing to purchase, the injection into the economy of these crisp new banknotes only serves to diminish the value of the so called cash we may already have or expect to accrue to our possession.

The official word on inflation as announced by the government published Consumer Price Index is touted as <1% and anyone foolish enough to accept this garbage as fact is cordially invited to invest in a bridge over the Hudson river which Leonidas is willing to sell at a bargain price. "Since last July, margarine prices have risen 6 percent. Women's dresses are up 6 percent. Beer is up 6 percent. Milk prices have risen 6.5 percent. Candy is 13 percent more expensive. Butter is up 19 percent. Shoes are up a whopping 45 percent. All in just over four months!" For those of you with the time to spare (74min) Leonidas would invite you to view the video here for a somewhat depressing exposition of the present situation obtaining in these formerly "free" United States. Hat tip to my colleague Ol' Remus.

While the government (and most privately administered retirement plans) use the CPI to determine cost of living adjustments to geezers living on defined benefit pension plans, it must be noted that the items EXCLUDED from consideration are food and energy costs. These are precisely the items constituting the bulk of the geezers living expenses. For this reason, and for those willing to connect the dots leading to the Great Government Default, the second consecutive year that SSI recipients will receive no COLA adjustment can come as no surprise. The politicians and bureaucrats in charge realize that the otherwise criminal ponzi scheme is a major contributor to the current financial/economic death spiral. In other words, the dollar train wreck is already baked into the cake. No 65 seat turnover in the House of Representatives can apply the brakes sufficiently without committing political suicide.

In the words of Pat Buchanan the US is looking more and more like the Fourth Republic of France where each election cycle produced radical 180 degree shifts in policy. This situation does however have a few interesting bright spots: What is to become of Speaker Pelosi? Will she retain her current perks including the military commuter jet to shuttle her entourage between her California wine country estate and Sodom on the Potomac or will she "take her marbles and go home"? On the other hand, there are many of us who would assert that her marbles were lost some time ago.