...To the crime problem.

"Who You Gonna Believe, The Government or Your Lying Eyes? UPDATED 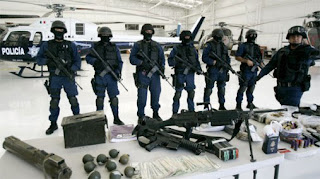 It has been many years since this writer first observed the aphorism: "Don't steal; the government hates competition". At the time, the admonition fit nicely onto a bumper sticker and elicited a smile and a chuckle. Likewise, almost everyone is familiar with the proverb regarding 'the only sure things in life are death and taxes". To those two categories could doubtless be added a corollary: the ruling government elite lies systematically in the furtherance of its various agenda items. The case for this assertion is presented convincingly by Judge Andrew Napolitano in his recent publication Lies the Government Told You.

The government consistently promotes its agenda of disarming the U.S. population and  relies heavily on the "mainstream" media outlets by touting the meme that the narco terrorists in Mexico are obtaining their arms and weaponry from the same suppliers who sell guns legally to law abiding US citizens e.g. mom and pop gun stores and gun show venders in the southern tier of states.


Since early last year, the [ATF]’s press releases have constantly made mention of the so-called Iron River. Call it branding, sloganeering, or the Big Lie. Say something often enough and people believe it. If the federal agency charged with policing American gun sales keeps talking about an Iron River of illegal gun sales, if the media repeats the menacing meme like a well-meaning mantra, an iron river there must be.
Not a trickle. A river. A steady flow of weapons, moving from Bob’s Gun Stores (or similar)  to Los Zetas drug cartel (or similar). A river that must be dammed! Because we’re damned if we don’t. Damned by a personage no less prominent than Felipe Calderon, the President of Mexico. Damned, chided and publicly humiliated for our inability to staunch the flow.

Such assertions are eagerly spread from government agency press releases by graduates of leftist journalism schools who are both lazy and anxious to further the government's citizen disarmament agenda.

I recently posted on the likelihood that the ATF was attempting to "pad" the statistics on private US sources for weapons recovered from Mexican drug gangs in order to justify its budget requests. Consider that as it seamlessly dovetails with Parkinson's Law to what has been learned of  "Project Gunwalker" especially as evidence surfaces  via WikiLeaks that our lying government has known from the get-go that the real main source of the weaponry in the hands of the Mexican cartels is in fact the Pentagon. (scroll up as the link is to the bottom of the posting)

Ask yourself, dear reader how many of the types of weapons displayed in the above graphic are sold at your local gun shop or gun show. If the truth of the matter is ever revealed, the minute trickle of gun shop arms making their way south into Mexico will turn out to be ordinary Mexican citizens attempting to defend themselves from the Zetas and the Sinaloa drug cartel.

According to the GAO report, some 30,000 firearms were seized from criminals by Mexican authorities in 2008. Of these 30,000 firearms, information pertaining to 7,200 of them (24 percent) was submitted to the U.S. Bureau of Alcohol, Tobacco, Firearms and Explosives (ATF) for tracing. Of these 7,200 guns, only about 4,000 could be traced by the ATF, and of these 4,000, some 3,480 (87 percent) were shown to have come from the United States.
his means that the 87 percent figure relates to the number of weapons submitted by the Mexican government to the ATF that could be successfully traced and not from the total number of weapons seized by Mexican authorities or even from the total number of weapons submitted to the ATF for tracing. In fact, the 3,480 guns positively traced to the United States equals less than 12 percent of the total arms seized in Mexico in 2008 and less than 48 percent of all those submitted by the Mexican government to the ATF for tracing. This means that almost 90 percent of the guns seized in Mexico in 2008 were not traced back to the United States.

The remaining 22,800 firearms seized by Mexican authorities in 2008 were not traced for a variety of reasons. In addition to factors such as bureaucratic barriers and negligence, many of the weapons seized by Mexican authorities either do not bear serial numbers or have had their serial numbers altered or obliterated. It is also important to understand that the Mexican authorities simply don’t bother to submit some classes of weapons to the ATF for tracing. Such weapons include firearms they identify as coming from their own military or police forces, or guns that they can trace back themselves as being sold through the Mexican Defense Department’s Arms and Ammunition Marketing Division (UCAM). Likewise, they do not ask ATF to trace military ordnance from third countries like the South Korean fragmentation grenades commonly used in cartel attacks.

Of course, some or even many of the 22,800 firearms the Mexicans did not submit to ATF for tracing may have originated in the United States. But according to the figures presented by the GAO, there is no evidence to support the assertion that 90 percent of the guns used by the Mexican cartels come from the United States — especially when not even 50 percent of those that were submitted for tracing were ultimately found to be of U.S. origin.

Latin America is awash in weapons that were shipped there over the past several decades to supply the various insurgencies and counterinsurgencies in the region. When these military-grade weapons are combined with the rampant corruption in the region, they quickly find their way into the black arms market. The Mexican cartels have supply-chain contacts that help move narcotics to Mexico from South America, and they are able to use this same network to obtain guns from the black market in South and Central America and then smuggle them into Mexico. While there are many weapons in this category that were manufactured in the United States, the overwhelming majority of the U.S.-manufactured weapons of this third type encountered in Mexico — like LAW rockets and M60 machine guns — come into Mexico from third countries and not directly from the United States.

Mexico's Gun Supply and the 90 Percent Myth is republished with permission of STRATFOR.

For those readers within puking reasonable traveling distance of the District of Criminals Columbia, you are invited to:


The historic first hearing of Chairman Ron Paul's monetary policy [sub]committee, to expose the Fed as the prime creator of unemployment and so much human suffering, will take place at: 10:00AM on Wednesday, February 9, 2011, in Room 2128 of the Rayburn House Office Building, the main hearing room of the Financial Services Committee. The witnesses include the eloquent Austro-free-market stars Thomas DiLorenzo of Loyola College and Richard Vedder of Ohio University.

Glimmerings of a Eureka Moment

More evidence emerges daily supporting the assertion engendered in my previous post as evidenced by the below embedded video produced by the main stream financial media. Heretofore the fiat currency dots were connected only by such "fringe" voices as Peter Shiff, the followers of Ludwig VonMises and the Austrian school of economics.

The so called "main stream" economic scholars are beginning to understand that the recent and ongoing unpleasantness in the middle east is driven by the planet's largest central banks causing inflation in the commodity (food) markets by running the printing presses in overdrive. As the talking head in the video points out, the poor in the Arab world must spend 80% of their income on food and food prices continue to rise exponentially. The populations of those countries are lashing out at their only available targets, the oppressive regimes tormenting them which in most instances are propped up by the American Empire.

Until recently the US through military and economic aid to tyrants in the region has been able to precariously maintain the political status quo. Those days are swiftly coming to an end as the US treasury is effectively bankrupt. We are very likely beginning to reap what our corrupt rulers have sown.


Visit msnbc.com for breaking news, world news, and news about the economy
cross posted at: Eternity Road
at 1:44 PM No comments: