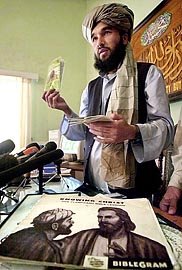 A statement from Yale University, defending its decision to admit former Taliban spokesman Ramatullah Hashemi pictured here, explained that he had "escaped the wreckage of Afghanistan." To anyone who is aware of the Taliban's barbaric treatment of the Afghan people, especially women, such words are offensive--as if Mr. Hashemi were not himself part of the wrecking crew. It is even more disturbing to learn that, while Mr. Hashemi sailed through Yale's admissions process, the school turned down the opportunity to enroll women who really did escape the wreckage of Afghanistan.

In 2002, Yale received a letter from Paula Nirschel, the founder of the Initiative to Educate Afghan Women. The purpose of the organization, begun in that year, was to match young women in post-Taliban Afghanistan to U.S. colleges, where they could pursue a degree. Ms. Nirschel asked Yale if it wanted to award a spot in its next entering class to an Afghan woman. Yale declined.

Yale was not alone. Of the more than 2,000 schools contacted by Mrs. Nirschel, only three signed up right away: Roger Williams University in Rhode Island, Notre Dame College in New Hampshire and the University of Montana, Missoula. Four years later, the program enrolls 20 students at 10 universities.