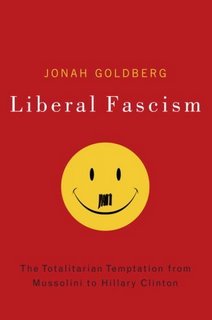 Liberal Fascism: The Totalitarian Temptation from Mussolini to Hillary Clinton

Since the rise and fall of the Nazis in the midtwentieth century, fascism has been seen as an extreme right-wing phenomenon. Liberals have kept that assumption alive, hurling accusations of fascism at their conservative opponents. LIBERAL FASCISM offers a startling new perspective on the theories and practices that define fascist politics. Replacing conveniently manufactured myths with surprising and enlightening research, Jonah Goldberg shows that the original fascists were really on the Left and that liberals, from Woodrow Wilson to FDR to Hillary Clinton, have advocated policies and principles remarkably similar to those of Hitler's National Socialism.

Goldberg draws striking parallels between historic fascism and contemporary liberal doctrines. He argues that "political correctness" on campuses and calls for campaign finance reform echo the Nazis' suppression of free speech; and that liberals, like their fascist forebears, dismiss the democratic process when it yields results they dislike, insist on the centralization of economic decision-making, and seek to insert the authority of the state in our private lives-from bans on smoking to gun control. Covering such hot issues as morality, anti-Semitism, science versus religion, health care, and cultural values, he boldly illustrates the resemblances between the opinions advanced by Hitler and Mussolini and the current views of the Left.