Stating the Obvious can get you Beheaded 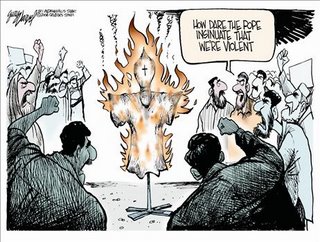 Recent allusions by Pope Benedict XVI to a 14th century exchange between a Byzantine emperor and a muslim "scholar" have caused a global rage my muslims resulting in the murder of an aging nun in Somalia and the torching of dozens of christian churches world wide. The question remains , who will man the walls in this, the 21st century?

In 846 a fleet of Arab jihadists arrived at the mouth of the Tiber, made their way to Rome, sacked the city, and carried away from the basilica of St. Peter all of the gold and silver it contained. This was a typical Muslim jihad naval razzia [raid]. Earlier, by 827, the Arabs had conquered Sicily, which they kept under their suzerainty for two and a half centuries. Thus was Rome itself under serious threat from a nearby Muslim colony.

During the same ninth century when Rome was assaulted and Sicily was conquered, the Muslim armies occupied Bari and Brindisi in Italy, for thirty years; Taranto for forty; Benevento for ten; they attacked Naples, Capua, Calabria, and Sardinia several times; they put the abbey of Montecassino to fire and the sword; they even made razzias into northern Italy, arriving from Spain and crossing over the Alps.

In 847, the year after the aforementioned naval assault on Rome, the newly elected Pope Leo IV began the construction of walls around the entire perimeter of the Vatican, 12 meters high and equipped with 44 towers. He completed the project in six years. These are the “Leonine” walls, and significant traces of them still remain. But precious few today understand that these walls were erected to defend the Holy See of Peter from an Islamic jihad. And many of those who do know this remain silent out of misplaced discretion.

ΛΕΟΝΙΔΑΣ would suggest that the west keep its powder dry and heed the motto:
ΜΟΛΩΝ ΛΑΒΕ
at 9:38 PM

So after he had washed their feet, and had taken his garments, and was set down again, he said unto them, Know ye what I have done to you? 13: Ye call me Master and Lord: and ye say well; for so I am. 14: If I then, your Lord and Master, have washed your feet; ye also ought to wash one another's feet. 15: For I have given you an example, that ye should do as I have done to you. 16: Verily, verily, I say unto you, The servant is not greater than his lord; neither he that is sent greater than he that sent him. 17: If ye know these things, happy are ye if ye do them. 18: I speak not of you all: I know whom I have chosen: but that the Scripture may be fulfilled, He that eateth bread with me hath lifted up his heel against me. 19: Now I tell you before it come, that, when it is come to pass, ye may believe that I am he. 20: Verily, verily, I say unto you, He that receiveth whomsoever I send receiveth me; and he that receiveth me receiveth him that sent me. John 13:12-20