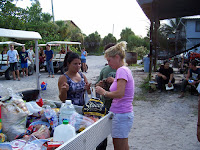 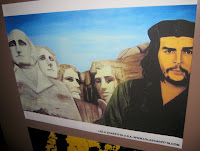 With the recent passing of the Independence Day observances here in the U.S. the full range of attitudes toward "patriotism" (or the lack of it) were displayed for all who are interested to see, from the annual "F**k the Fourth" party in the freak show buy the bay to the arrival of a boatload of refugees welcomed by ordinary Americans. Being an occasional visitor to the San Francisco Bay area zombitime photo essayist web site as well as a native of the great state of California, I decided to see if anything interesting was on display as pertains to the freak-show by the bay. I was not to be disappointed. Zombitime presents photo coverage of most of the demonstrations, protests and odd celebrations offered by the strange inhabitants of that area. The sample presented here is just a teaser and a visit to the Zombietime site offers a surfeit of glandular stimulation.

In contrast, I today noted the news coverage of a group of 27 individuals of the opposite persuasion. A group including doctors dentists as well as other riff raff. Of course these latter individuals had no intention of creating a spectacle but nevertheless it is interesting to compare the contrasting images. This group of 27 men women and children underwent considerable inconvenience in making good their escape from the wonderful Caribbean island prison paradise known as Cuba. You know, that place with the free high class health care touted by Michael Moore and where one is only allowed a food ration book and avoid prison if he refrains from offending the "maximum leader" more widely known as El Comandante en Jefe.
at 6:18 PM