This Just In: Cooling? 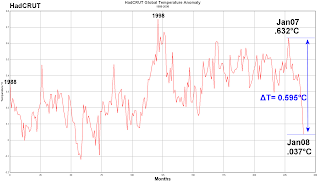 With the empirically observed global mean temperature data obtained over the last several decades (see above graphic) revealing the gradual 1.13 degree Celsius rise during the 20th century ending 10 years ago (1998) coupled with the decline in the just ending winter in the northern hemisphere the global warmistas are having a bit of difficulty. With no measurable increase in global mean temperature for 10 years and indeed a precipitous recent decline in such measurements, the warmistas are resorting to their favorite tactic of ad hominum attacks on those who would dare risk careers erected on grants by bureaucrats and politicians of taxpayer funds designed to increase government control of individual behavior.

We all remember during the last few years the seizure upon any unusually warm summer temperatures as further proof of the catastrophic impact of economic activity on global warming. Conversely, the implications of planet wide record setting cold temperatures and snowfall figures of the past winter season have been either ignored by the media and the warmistas or spun as further proof of the warming trend of the planet in order to push their agenda of forcing the implementation of drastic measures to transfer wealth and political power to the worlds politicians. One reporter on the recent record cold and snowfall experienced in the northern hemisphere received the following email from a warmista/bureaucrat who appears to work for the government of Ontario, Canada who states as follows: "What are you, retarded? Global warming = MORE snowfall. Not less." Meaning snowfall records will be broken. The way it is spun by the warmistas is that regardless of their prior predictions, ANY unusual event in the climate or weather is the result of anthropogenically caused global warming. What is most remarkable is the effectiveness of this brainwashing campaign on the general population.

The warmistas however, are less and less effective in convincing all and sundry that "the science is settled" and continue to rely on their fall back position of intimidating those who are skeptical of the heavy reliance on computer models referred to by one climatologist as "garbage in, gospel out".
at 9:50 PM

I'd better go out and purchase some carbon credits so that I can help save the world.

I also have to change the furnace filter because I've had it on all winter because of the warming.....

I am sure that both of you esteemed gents have noticed the recent change in the AGW jargon, from "global warming" to "climate change".

It occured to me that they realized that a chaotic, constantly changing climate is a dangerous thing to stake your career, reputation, livelyhood, and future on. As long as it was warming, they were good. However, they realized that once the warming ended, as it almost surely would, they would be without a job!

Hence, "climate change"; the one thing, in this chaotic and incompletely understood system, that you can take to the bank. The only thing constant about our climate is that it is in a constant state of change!

Now, "they" can dance about with glee and claim that they were "right all along!" no matter WHAT happens, because they have adopted "climate change!"

Warmer, dryer? JUST WHAT WE EXPECTED!

Warmer, wetter? JUST WHAT WE EXPECTED!

Getting the picture? This was a subtle shift, which we allowed them without much muss or fuss, but it has turned into a very serious problem. They get to be right no matter WHAT HAPPENS.