What Goes Around Comes Around? 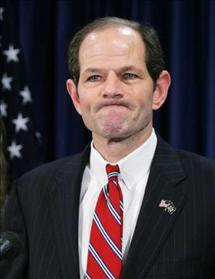 I've found, in my short tenure on this fine Earth, that it is best to never pretend to know what others are talking about when you are lost beyond words.

While it may cause you to look dumb in the short term, I've often found that others in the group are similarly confused and actually appreciate my forwardness.

I can see that you are trying to draw a comparison between Nifong and Spitzer. The only link that i can see is that they were both "holier-than-thou" lawmen that insatiably chased down people who they saw as "lawbreakers", while at the same time, breaking laws themselves.

However, Nifong broke his laws in the unethical pursuit of innocent men. Spitzer broke his laws because he is an immoral, selfish jerk that cares more about orgasm than the well-being of his family. Pardon the crudeness, but I cannot help but call a spade a spade.

So I am a little lost on the comparison, and would very much like you to elaborate a bit more.

Sorry Goober my bad. I was not comparing violations of the Mann Act with Nifongs malicious prosecution:
"It’s worth noting that Spitzer wielded the Martin Act with often shocking ruthlessness, typically targeting his political enemies. He reportedly threatened to indict insurance giant AIG unless the board removed chairman Maurice “Hank” Greenberg, who had spent his life building the company. In going after Dick Grasso for his New York Stock Exchange compensation plan that Spitzer deemed immoral, a Spitzer associate allegedly threatened to out the business leader’s extramarital affair — a delicious irony in light of the governor’s present predicament."
For much more read the rest here.

And an idiot. A man living in a fragile glass house who made his name by throwing stones. What did he expect if he wasn't squeaky clean? That no one would come after him like he went after them? Did this guy have a God complex? I mean, WTF?

That's right: they were both malicious slanderers who viciously mis-used their power.

I hear there was dancing on Wall St. As indeed there should have been.

Couldn't find your email, so I really came over to thank you for your response to Defiant Lion...or maybe a more apropos nic would be "Rabid Lion" -- that's one fellow I wouldn't want on my side...zilch for strategy beyond waving his sword and shouting.