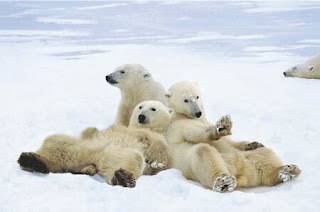 When earlier alarmists predicted a coming ice age, the "culprit" was mankind's use of fossil fuels. Now that todays warmistas are preaching man caused "global warming'' the culprit is .... fossil fuels!

Climate Change: Did NASA scientist James Hansen, the global [warmista] in chief, once believe we were headed for . . . an ice age? An old Washington Post story indicates he did


On July 9, 1971, the Post published a story headlined "U.S. Scientist Sees New Ice Age Coming." It told of a prediction by NASA and Columbia University scientist S.I. Rasool. The culprit: man's use of fossil fuels.

The Post reported that Rasool, writing in Science, argued that in "the next 50 years" fine dust that humans discharge into the atmosphere by burning fossil fuel will screen out so much of the sun's rays that the Earth's average temperature could fall by six degrees.

Sustained emissions over five to 10 years, Rasool claimed, "could be sufficient to trigger an ice age."

Aiding Rasool's research, the Post reported, was a "computer program developed by Dr. James Hansen," who was, according to his resume, a Columbia University research associate at the time.

So what about those greenhouse gases that man pumps into the skies? Weren't they worried about them causing a greenhouse effect that would heat the planet, as Hansen, Al Gore and a host of others so fervently believe today?

"They found no need to worry about the carbon dioxide fuel-burning puts in the atmosphere," the Post said in the story, which was spotted last week by Washington resident John Lockwood, who was doing research at the Library of Congress and alerted the Washington Times to his finding.

Hansen has some explaining to do. The public deserves to know how he was converted from an apparent believer in a coming ice age who had no worries about greenhouse gas emissions to a global warming fear monger.

This is a man, as Lockwood noted in his message to the Times' John McCaslin, who has called those skeptical of his global warming theory "court jesters." We wonder: What choice words did he have for those who were skeptical of the ice age theory in 1971?

People can change their positions based on new information or by taking a closer or more open-minded look at what is already known. There's nothing wrong with a reversal or modification of views as long as it is arrived at honestly.

But what about political hypocrisy? It's clear that Hansen is as much a political animal as he is a scientist. Did he switch from one approaching cataclysm to another because he thought it would be easier to sell to the public? Wa$ it a career advancement move or an hone$t change of heart on $cience, based on empirical evidence?

If Hansen wants to change positions again, the time is now. With NASA having recently revised historical temperature data that Hansen himself compiled, the door has been opened for him to embrace the ice age projections of the early 1970s.

Could be he's feeling a little chill in the air again.

Oh GOD that is a cute picture!