Bend Over When you Hear the Oink 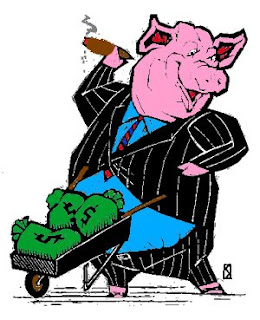 Today the US Senate will begin debate on S.2191: "A bill to direct the Administrator of the Environmental Protection Agency to establish a program to decrease emissions of greenhouse gases, and for other purposes (read the bill to learn the "other" purposes)." This is in fact a new record with regard to so called "pork barrel" spending in the legislative history of such outrages and is tacitly approved by the presidential nominee designate of the Republican Party.

For anyone who is interested, "greenhouse gases" include: H2O (water) which covers more than 70% of the globe and the lower atmosphere, CO2 (carbon dioxide), a necessary ingredient in plant photosynthesis which is the nutritional basis for all life forms on the planet and CH4 (methane) which is produced by the biodegradation of all nutrients.

Both the impact on global temperature of greenhouse gases as well as the extent of their anthropogenic sources is hotly debated by scientists of various persuasions but has been seized upon by politicians in order to advance their own agendas of increasing governmental power. In the United Kingdom a proposal has been put forward in Parliament to issue each citizen a "carbon ration card" which would allow each individual a stated amount of CO2 production and would be required to be presented at the purchase of any fossil fuel product, airline ticket or pay an energy utility bill. Given the chances of the Democratic Party soon achieving control of both the executive and legislative branches of the US government can such an outrage be excluded from being foisted upon our own population? How far down this green mile (pun alert) can we expect the requirement of an "exhale permit" for each individual? After all, the quantity of CO2 in the exhaled breath of living organisms is not inconsiderable.

Law professor wants to use courts to fight global warming

EUGENE — University of Oregon law professor Mary Wood is tired of waiting for government officials to take action on global warming. So she’s devised a new legal tool to hurry them up.

Drawing on her background in both natural resources and property law, Wood has developed a theory that claims the atmosphere is an asset that belongs to all but is held in trust by the government. The government has a legal obligation to protect that trust from harm, she argues, just as financial managers have a legal obligation to protect the monetary assets in their care.

“The main problem with climate is that no government is taking responsibility for it and our government is sitting idle [but not for long] while this catastrophe is unfolding,” Wood said

Gentle reader, if you believed I was engaging in hyperbole regarding an "exhale permit", read more
here.
at 10:22 AM