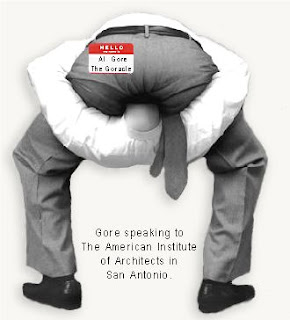 Last Monday, June 2nd, Senator Harry Reid (D Nevada) assured us: "It's clear that "global warming is real" and Congress must act." Wow! Senator Reid has always appeared to this writer to be a profound thinker with astonishing intellectual and logic gifts, (irony alert) but the preceding statement is so profound as to boggle the mind. What next may we expect; "Tectonic movement and continental drift are real and Congress must act."? While such a discussion may appear hyperbolic, if collectivist politicians perceived an opportunity to devise a tax or regulation which would benefit themselves, a governmental bureaucracy or a deep pocketed constituency, appropriate legislation would begin wending its way through the ozlike congressional labyrinth.

In a previous post I alluded to the "pork barrel" nature of the subject of the present debate on S 2191 a legislative "cap and trade" mandate to affect a regression of the US economy to pre industrial levels by the year 2050. In determining the motives behind such a proposal, the most important question to ask is: "qui bono" ( who benefits?). Consider the implication of the following report from Reuters:

While Gore, a politician turned environmental activist chairs Generation Investment, David Blood, a former CEO of Goldman Sachs Asset Management, is managing partner of the firm, which was founded four years ago."

Generation Investment Management is a cap and trade brokerage firm that Mr. Gore uses to "offset" the huge "carbon footprint" generated by his personal lifestyle and globetrotting activities to hype the catastrophic environmental consequences of man made global warming (e.g. the recently revealed warmista religion). Mr Gore has consistently refused to debate the validity of the tenets of his new religion with credited scientists such as Lord Moncton and a 15 year old honor student who question the computer generated dogmas of the warmista doctrine. To quote one wag on the efficacy of computer modeling for future climate change: "garbage in, dogma out". Gore simply states: "There is no need to debate. The science is settled". This reminds us of the "settled science" of the geocentric universe insisted on by religious and political leaders in the 14th century.
at 10:05 AM

Great point! "Tectonic movement and continental drift are real and Congress must act."

I'm going to remember that!

I know I'm dating myself, but I must say, right on! Great column and I certainly share your views.

Thanx for the read,