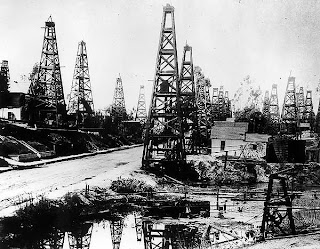 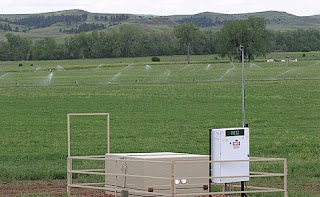 The top graphic is of the Belmont oil field circa 1921 (click on image to enlarge). The wooden derricks date the photo as having been taken prior to 1925 when the addition of "runarounds" and crown "A" frames were included on wells drilled by the rotary method as opposed to the cable tool methods of the 19th and early 20th century. The field was approximately 4 miles west of the Los Angeles civic center. The enviros would have us believe that modern oil production results in scenes like this. The Belmont area has recovered sufficiently to be the battleground of two of the most violent latino street gangs in Los Angeles county.

The lower photo shows a recently completed energy well head in the Powder River Basin of Wyoming. The fencing is to prevent the local ruminants from damaging the sensative instrumentation and according to the enviro religion would inflict irreparable harm to the caribou (reindeer) population of the north slope of Alaska which has doubled since the development of the Prudhoe oil field in the 1970's.

The photo of the Belmont field evokes a certain nostalgia on the part of your humble scribbler as it much resembles the oil fields 20 miles to the south in Signal Hill and Long Beach which he grew up and worked in during a bygone era P.E. (pre environazi)
cross posted at: Eternity Road
at 4:47 PM

I never knew that.

I've been wondering if there is a way to meld the artificial reefs projects and offshore oil platforms - something to make them more palatable to the populace, at least from an appearance perspective.

But as far as the land drilling goes, this is pretty impressive. WHY don't we hear about this stuff?

Rose,
Off the city of Long Beach a partnership of several oil companies has constructed islands. The islands are landscaped and have structures to conceal the oilfield equipment. The islands provide shelter for weekend boaters to anchor behind. Unless one knew that they produce oil they would not appear objectionable. Then again, beauty is in the eye of the beholder.
Another interesting bit of data is available here
ΛΕΟΝΙΔΑΣ was an oil man before he was a cop or sailor.