Desde Cuba (From Cuba in the Winter) 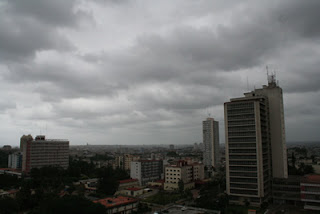 The following is translated from a the posting 19 November 2008 of a Cuban blogger Yoani Sanchez. She posts from Havana and must surreptitiously view her blog from a tourist hotel which excludes Cuban citizens who are not Communist Party apparatchiks. It seems not much has changed since ΛΕΟΝΙΔΑΣ visited that hapless communist nation some years ago. See here, here and here.

The sky is not always that precious blue of the tourist postcards. Thank goodness, because I can not imagine a year with scorching sun without the pause of these weeks that bring cold fronts. Since Monday a cloud has come, bringing London to Havana and severe flooding in the east of the country. The streets are remarkably empty at night because the cold scares away the usual denizens of the parks and sidewalks. Boarding a crowded bus is no longer the fastest way to acquire odor in one’s armpits, rather the entrance to a warm and friendly space. With the low temperatures, humor and tolerance improve; for the old, their bones ache and hot chocolate becomes a recurring hallucination. December is so close that it’s not worth starting anything, say those who have postponed projects throughout the year. The time to spend more is coming, presaging that pockets will be especially empty this Christmas. However, the most sensitive topic is that of coats and blankets, the little protection from the damp cold that enters through the gaps in the windows.

I see people on the street with sweaters and thick, padded synthetic coats, but none of these garments could be purchased with the wages they earn from their work. One has a leather coat sent to him by a sister who lives in New York and the striped one was given to the girl as a gift from a tourist passing through the city. A young boy has a waterproof raincoat inherited from his brother, who in turn got it from an uncle who confiscates luggage at customs. The old woman crossing the street is careful of her wool socks, which she got from a neighbor in exchange for a blender. Only the guard at the hotel boasts a denim jacket, with shiny new buttons.

I like the winter and the affability it awakens in people, but I know that for many it’s the season of certain worries and shame. Of not being able to sleep on the park bench, where the rest of the year one gentleman with raggedy clothes has his only home. Of children mocked in school for wearing a coat purchased during the rationing of the 1980s. The cold emphasizes the differences between those who can close the door and those who don’t have a house with windows that shut. It highlights the contrast between those with a long-sleeved garment and those who wear two sweaters because they don’t have a coat. Everything depends on the thermometer and its not dropping another ten degrees, because the housing and clothes of the poor will not withstand a single snowflake.

To experience Cuba under the Communist regime is to view any society which is unfortunate enough to fall under the sway of the collectivists. Yoani is from time to time arrested and harassed by the Cuban police.

I have always thought that the majorities in every society must be happy enough to remain complacent. They must then, subscribe to the ideology that underwrites it. Dissent is always from a minority. An authoritarian society is always poorer than a free society and the people of the free society often mistakenly think that the people in the other society feel enslaved to some degree, when in reality, the majority there don't feel that way at all. That is the power of ideology.

Out of curiosity, what does your blog name mean?

Also, why do you use the name "collectivist totalitarian"?

Collectivism does not exist. It is merely a metaphysical concept, so no one ever is or was a collectivist. More succinctly, people are individuals who advance their self interest by using collectivist concepts as ideological devices that have the purpose of controlling and influencing others. Totalitarianism is an extreme form of individualism from the perspective of the totalitarian. He has convinced others to obey him. I have always felt that as Americans we should heap our ridicule not on the Cuban authorities but upon the slaves there--for being slaves.

RexLex:
"I have always thought that the majorities in every society must be happy enough to remain complacent. They must then, subscribe to the ideology that underwrites it."

I suggest you do some research on revolutions. The American revolution prevailed with the active support of about 30% of the population.

"Dissent is always from a minority."

Dissent is always from the weaker segment of society, not necessarily a minority.

"Out of curiosity, what does your blog name mean?"

Your answer is HERE.

"Also, why do you use the name "collectivist totalitarian"? Collectivism does not exist..."

COLLECTIVISM is a term used to describe any moral, political, or social outlook, that stresses human interdependence and the importance of a collective, rather than the importance of separate individuals. http://en.wikipedia.org/wiki/
TOTALITARIANISM [a term coined by Benito Mussolini in 1926] (or totalitarian rule) is a concept used to describe political systems where a state regulates nearly every aspect of public and private life. I assure you that Cuba falls under this definition

"I have always felt that as Americans we should heap our ridicule not on the Cuban authorities but upon the slaves there--for being slaves."

You might have your mind changed by visiting that nation and meeting the ordinary citizens there.

Hello and thank you.

"I suggest you do some research on revolutions. The American revolution prevailed with the active support of about 30% of the population."

30% of the population that probably represented 90% of the wealth (?). I agree that "weaker" is a better word than "minority".

I understand the definitions of collectivism and totalitarianism. I thought you signed a post with the name "collectivist totaltarianism" and I asked why, but that may have been the title of the post. Sorry for the confusion.

My point was that, in reality, man never acts as a collective, but he uses the concept of the collectivist idol to justify his totalitarian objectives.

Most of the Cubans I know are in Miami. My words were harsh but I am not without sympathy for those suffering. People ultimately deal with the consequences of their beliefs. Outside agents rarely change the type of rulers without first changing the beliefs of the people.

The label field at the bottom of each post is a subject tag. By clicking on it all postings from the blog with that subject tag will be displayed.

All human actions are at their root individual. The important thing about them is the motivation. If I point a gun at you and demand your wallet the action of you handing it to me is an individual one. You wish to avoid being shot and are hoping that by complying with my demand you can avoid such an outcome.