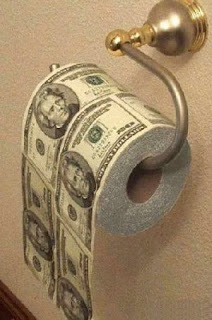 The national debt of the US as of this date is over 10.5 Trillion dollars and has been increasing at the rate of just under 4 billion dollars per day. That is all about to change very soon as Washington issues bales of new treasury notes to fund the massive bailouts of the various banks, insurance companies, and industrial enterprises lining up at the door of "Bailout" Ben Bernanke and Hank Paulson. Various estimates of the ultimate cost of filling the trough from which these failing parasites are about to sup range from a low of $3.6 Trillion to upwards of $5 trillion when the interest is computed.

This weekend, the worlds G-20 industrialized nations will be meeting in Washington to discuss addressing the planet's monetary/economic crisis (arguably caused by the insane creation of fiat money and junk credit by those same nations). The "fix" (yes gentle readers those are scare quotes) will likely be the devaluation of the world's currencies by "monetizing" most outstanding debt. In other words:

They cease all gold sales and instead [of confiscating it], raise the current official central bank price of gold from its booked value of $42.22 an ounce — to a price that monetizes a large enough portion of the world's outstanding debts.

That way, just like in 1933, the debts become a fraction of re-inflated asset prices (led higher by the gold price).

And this time, instead of staying with the dollar as a reserve currency, the G-20 issues three new monetary units of exchange, each with equal reserve status.

The three currencies will essentially be a new dollar, new euro, and a new pan-Asian currency. (The Chinese yuan may survive as a fourth currency, but it will be linked to a basket of the three new currencies.)

Under this nightmare(?) the new price of gold would range between $53,000 and $10,000 per ounce depending on the percentage of the debt to be monetized. One's first reaction to the possibility of such a scenario playing itself out is incredulity; but consider this: 1. The Constitution of the United States in Article I section 8 assigns the power to coin money to the Congress. The US currency has had NO connection to metal coinage since August of 1971. 2. Twenty years ago would we have foreseen that in 2008 a more or less admitted Marxist would be elected to the US presidency?