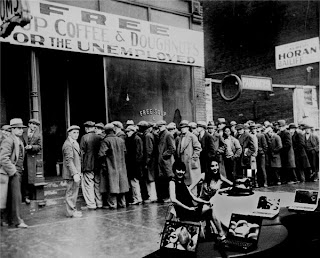 The impact of the current global financial and economic tsunami is calling into question the policies advocated by the warmistas and their prophet Al Gore as well as his enabling high priest James Hansen. The data released recently by one source estimates the recent loss to the wealth of each US family at 20% and the mood of the electorate is not conducive to "business as usual". This is a mere pittance compared to the negative impact to be experienced if the policies engendered by adherence to a target of reducing carbon emissions to 80% of those of 1990 by the year 2050 are pursued.

The pseudo science cited by the warmistas rests on a series of assumptions which have been conjured out of thin air such as: "the social costs of carbon is the damage done by emitting an additional unit (ton) of carbon dioxide into the environment". Never mind asking the embarrassing questions concerning the objective (scientific) metrics of such an assumption. The mere fact that arcane graphs and tables are presented should be sufficient to intimidate any intellectually challenged lay person or politician considering skepticism of such nonsense.

The political/economic impact of adopting the warmista agenda on the state level can best be illustrated by the case of the state of California which signed on to the green/warmista agenda in 2006 and is currently experiencing an unemployment rate substantially above the national average. With additional regulations and tax increases intended to address the multi billion dollar budgetary shortfall as well as the greenie agenda scheduled to be kicking in during 2009, the exodus of businesses and productive residents to neighboring states is accelerating exponentially. This reminds your humble scribbler of one of the few pearls of wisdom offered up by a professor of political science many years ago in a California University of all places: "When the water reaches the upper decks; follow the rats".

The just enacted mega pork stimulus package proposes, through sleight-of-hand plus smoke and mirrors, ostensibly to avoid the effects of this depression (let's call it what it is) by prescribing a mega dose of what initially caused the event i.e. easy fiat money and easy credit is likely to to result in just the opposite.

As bad as the results of this "remedy" will be, there is at least an up side and that is that the population will likely not be as ready to accept a further descent into a pre industrial society engendered by the unquestioning adoption of the warmista agenda.

Enjoy your pain. The White House Marxist Messiah will be doing his best to extend it.

Devastating. Just devastating. The senate just passed the wretched thing. No one has even read it.

Now that it is SIGNED people get a chance to see what's in it...

Check this out -
Smelling a RAT LOOK WHAT GOT SLIPPED INTO THE PORKULUS BILL!

The provision, which attracted virtually no attention in the debate over the 1,073-page stimulus bill, creates something called the Recovery Accountability and Transparency Board — the RAT Board, as it’s known by the few insiders who are aware of it. The board would oversee the in-house watchdogs, known as inspectors general, whose job is to independently investigate allegations of wrongdoing at various federal agencies…. First, let’s ask ourselves how this stimulates the economy. Why include this in an emergency stimulus bill when it has nothing to do with stimulus or economics? ….

How did it get into Porkulus? Grassley says it wasn’t in the original bill passed in the Senate, and it suddenly appeared in the conference version. No one has claimed ownership of the RAT Board yet…

Putting IGs under Nancy Pelosi’s thumb eliminates transparency and accountability, and calling it an Accountability and Transparency Board is a grim joke. It’s simply a mechanism to shut down potentially embarrassing (or worse) IG investigations while commanding others against political foes. Read the rest at HotAir.com

God help us all.