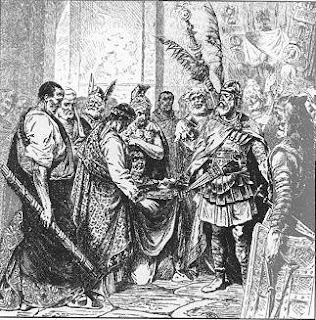 It is a pity that so little of history is taught these days in the government schools. In lieu of learning the value of recycling, living the "green" lifestyle and the wonders of diversity our young citizens could perhaps be acquiring the insight and tools necessary to compare the similarity of todays events with what has previously transpired, thus possibly avoiding the inevitable unpleasantness. Our entire society reminds me of nothing so much as the teenager who has just lost his virginity and believes he is the discoverer of sex.

We live today in an era not unlike the disintegration of the Roman Empire. Hollywood notwithstanding, there were many areas within the empire where the barbarians were welcomed by the population as a blessed deliverance from the oppressive taxation of the emperor and his Curiales (tax collectors). By the early 4th century it was common practice for middle class artisans and small farmers to abandon their shops and small holdings to avoid the oppressive indictio and flee to the countryside to join the serfs who tilled the soil.

A haunting commentary by a contemporary of the Emperor Constantine I, Zosimus, writes the following which is equally applicable to our own government:

"Constantine not only continued to waste the revenue of the Empire in useless expenses, and in presents to mean and worthless persons, but oppressed those who paid the tributes, and enriched those who were useless to the State. For he mistook prodigality for magnificence."

Sadly, it is likely those lessons will have to be relearned before any improvement upon our current path will occur.

Meanwhile, as most historians are aware, the Western Roman Empire's "official" end was on 4 September 476 AD with the accession to the Imperial throne of the German, Odoacer. Perhaps future historians will mark the end of our Republic as 20 January 2009 with the inauguration of the Kenyan Barak Hussein Obama. These are indeed "interesting times".
at 9:39 PM