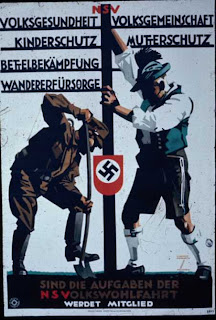 Todays collectivists who are fond of disparaging Laissez Faire Capitalism which they fault for the current economic/financial pass to which we have come are inadvertently cheer leading for the system which they regularly accuse conservatives of advocating: fascism. Our so called "mixed economy" which describes the current situation in the US is unadulterated fascism and is defined as an economic system nominally owned by private persons but in fact controlled and regulated by governmental authority.

Today’s US Economic System Is A “Mixed [Fascist] Economy,” Not Laissez-Faire Capitalism.

And even if all of the facts as presented [by] those who would blame "capitalism" were absolutely true, it would not imply any reason whatever to condemn capitalism. Capitalism is a system in which absurd, self-destructive behavior severely punishes whoever is guilty of it. Such people suffer losses, go bankrupt, and lose their ability to have significant further economic influence. Their example then serves as a lesson to others to avoid such behavior.

However, we are very far from having capitalism today, certainly not capitalism in its logically consistent form of laissez-faire capitalism. What we have today is a “mixed economy,” that is, a severely hampered, distorted form of capitalism. In such a system, such behavior can continue, thanks to government subsidies, grants of monopoly privilege and suppression of competition, and now by means of government “bailouts.”

A mixed economy is an economy which remains capitalistic in its basic structure, but in which the government extensively intervenes with the initiation of physical force to compel actions that are against the interest of individuals and/or to prohibit actions that are in the interest of individuals. For example, today it compels people to pay an income tax, which is against their interest but which they pay in order to stay out of jail. It also prohibits them from engaging in various business mergers or paying wages below a certain amount, things which it would be to their interest to do but now do not, because they wish to avoid being fined or imprisoned. (In my recent article “The Myth that Laissez Faire Is Responsible for Our Financial Crisis,” I present an extensive description of the extent of government intervention.)...

In a mixed [fascist] economy, every significant-sized business must fear what the government can do to it. It needs protection, in the form of political connections. It secures these through appointing former government officials to its board of directors, paying such officials lavish consulting fees, and giving lavish campaign contributions to candidates for public office. In these ways it buys the protection it needs. More

Make no mistake; the politicians who espouse solutions to the problems which they themselves are responsible for and which involve "more of the same" are leading their constituents down the primrose path to National Socialism. Indeed, Rahm Emanuel's cliche "Never let a serious crisis go to waste" is exactly how the National Socialists came to power in Germany in 1933.
at 8:59 PM