A "Man of the People" 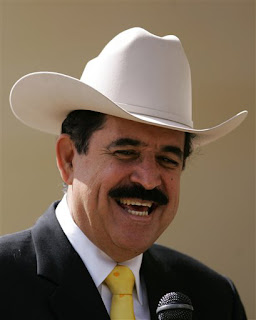 The deeds of Honduras' president in exile Mel Zelaya give new meaning to the quote from the George Orwell classic "Animal Farm": "All Animals are Equal. Pigs are however more Equal".

On Sunday 28 June Zelaya was flown from Honduras to San Jose in neighboring Costa Rica. It was only a matter of hours until the usual Leftist suspects in the hemisphere including Hugo Chávez, the Castro brothers, Daniel Ortega and our very own marxist messiah denounced the Honduran government for the supposed "coup".

In less than the first 5 days of his exile the "Man of the People" managed to run up charges on his government credit cards to the tune of USD $80,000.00+. Those silk suits used for strutting before the UN General Assembly apparently don't come cheap. Understandably the Honduran government canceled his credit cards in addition to the lease of 50 luxury cars and other perks.

The chancellor of Honduras confirmed that Mel Zelaya ordered the withdrawal of 40 million lempiras [USD $2.8 million] from the Central Bank of Honduras.

When the investigations were made at the presidential house, black garbage bags filled with thousands and thousands of dollars were found, as well as in almost every drawer.

Investigations documented over 600 million lempiras [USD $31.2 million] worth of expenditures that Zelaya had spent on his quest to hold the “opinion poll” to allow the fourth vote [to remain in office beyond the constitutional term limit].

It appears that the lawfully elected government of Honduras has been expelled from the Organization of American States while Cuba has been invited to join.