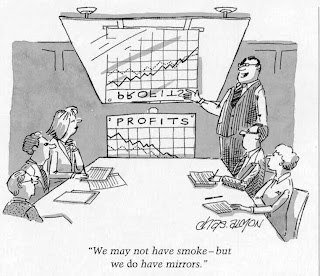 Are any of you, gentle readers, puzzled by recent economic hype as is this humble blogster? The talking heads seem to filling the prime time airways with references to "green shoots" and indications that "the corner of the recession has been turned" and the "worst is over". All of this is in spite of the data which records the continued downward spiral of the world's financial/economic indicators.

Here in the US the (official) job loss for July was 247,000 and it is touted as "good news" (imagine the retching and kvetching if a Republican were in residence at 1600 Pennsylvania Ave). Additionally, note the recent run-up of nearly 3,000 points in the Dow Jones index since the lows of January. Very impressive no? Jim Rogers, CEO of Rogers Holdings Investment Group hints that the Dow could reach 1 million due to the recent and proposed bailouts and "stimuli" by the Federal Reserve and US Treasury (read taxpayer).

The Troubled Asset Relief Program (TARP), which provided $700 billion in bank bailouts, started under Bush and expanded under Obama, entails that the US Treasury purchases $700 billion worth of “troubled assets” from banks, and in turn, “that banks cannot be asked to account for their use of taxpayer money.”[33]

So if banks don’t have to account for where the money goes, where did it go? They claim it went back into lending. However, bank lending continues to go down.[34] Stock market speculation is the likely answer. Why else would stocks go up, lending continue downwards, and the bailout money be unaccounted for?

Also for your further consideration is the status of the two major social "safety nets" in place here in the US. In case you weren't paying attention, the Medicare Hospital program (you know, the one that the politicians assured us was to remain solvent for a score more years) went broke LAST YEAR.

When the unfunded and off budget liabilities of Medicare and Social Security are added together, the sum as of NOW is in the neighborhood of $83 trillion.

For those of you government school dropout/graduates, that is a dollar sign followed by the numeral 83 and a pageful of zeroes.

The bill for the cost of turning over control of the monetary, financial and economic systems to political hacks since about 1912 is about to come due.