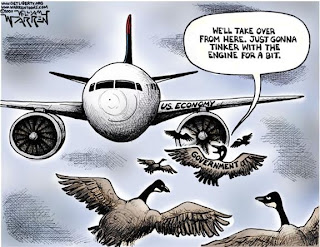 Gentle readers; let's see if this humble blogster understands the most recent analogy put forth by our dear leader as an argument supporting the pro side in the debate over the pending federal health care proposals. He states that the government should offer a "competing" alternative to privately provided health insurance and cites the success of the private services of United Parcel Service and Federal Express who "compete with the U.S. Postal Service".

Had Dan Quayle uttered such an outrageous analogy he would have been justifiably excoriated in the media as an intellectually retarded idiot. Our dear leader is however given a pass for having insulted our intelligence apparently due to his messianic status.

Any high school sophomore able to earn a passing grade in a civics class should be aware that ALL private entities are prohibited by law from delivering first class mail. Couple this monopoly granted to the USPS with the abysmal quality of customer service (rivaled only by the local Dept. of Motor Vehicles) with the continued failing management of that government enterprise and it calls to mind the old aphorism describing the third world effort to develop a ballistic missile. The missile is named the Bureaucrat: "It won't work and it can't be fired".

The only examples of monopolies being able to effectively suppress competition involve the use of the government wielding its monopoly on the use of force. And these twits insist that we cede additional power to their collectivist wet dreams.

Yes and the insurance companies do such magnificent job of managing health care and keeping the costs low. And Medicare sucks so bad as compared to the glorious insurance companies. And what's with the USPS with online labeling and front door pickup of packages. I refuse to use that convenience, and instead prefer to drive 20 minutes to a UPS drop off.

I may be mistaken but is it not government mandates as to health insurance coverage that contribute to high costs? You may be paying for sex change or drug treatment coverage and not want it.
The Postal service is effectively bankrupt according to the GAO and without its monopoly on the delivery of first class mail could not compete with UPS or FEDEX. It does not rely on private sources to raise capital but is supported by taxes collected at gunpoint by the government in order cover its losses and to keep down its rates for packages.
"I...prefer to drive 20 minutes to a UPS drop off."
At least it's Your choice instead someone with a gun:o)

Yes Pogo, and I also love the long slow boat to China delivery service UPS and Fed Ex gives me. On the other hand, I receive 2-3 day package delivery from the USPS for the price of 7-10 delivery from anyone else. And what about all the weight you can ship, up to 70 pounds, for a low price that the USPS offers?

And I agree Pogo, what is with the non profit status of the USPS? Their commie loving blood certainly shines through their thin skin as why don't they make a profit to pay their execs those fat bonuses and salaries? We know how the cons love their fat cats, with their excessive compensation, so I agree Pogo, let the USPS make a profit. We don't want to ruin the cons vicarious world of make believe, in that they too, will soon be a fat cat.

We are all paying high rates for the slow boat to China in our taxes, and then going on about how cheaply the USPS delivers postage. Understand, if possible considering your propaganda-clouded leftist mind, that you pay one way or the other. Healthcare won't be free, you just might not have to pay at the doctor's office.

I gurantee you that you pay more for USPS than UPS or Fedex when all things are considered, you've just allowed the gubmint to pull the wool over your eyes with promises of shiny baubles.

We have no use for such ignorance in this country. Wise up, pal!

Sorry Goobey, not going to bother with much of an answer as the evil con over lords, Crum and Shade, will just delete it.

See Goobey, all you cons do is repeat your crap to each other, so many times and no matter how crazy it is, you eventually believe it. Kindof like the big guy in the sky deal.

That's a con tactic, it's a psychological trick. W, Palin, RayGun, they all know it works. And so does Shade and the Crum.

the only thing I know for a fact is that the postal service is great, for 40 cents I get to send a piece of mail anywhere I want in the US, whereas ups and fedex may cost more.

Eco,
By Federal law, the USPS is the ONLY entity that can deliver first class mail. That is known as a monopoly.