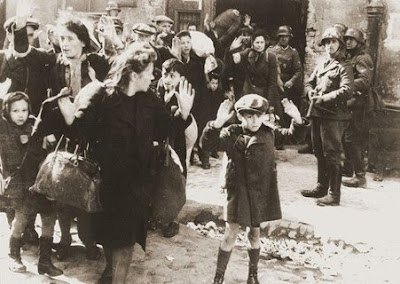 In 1935, the avowed socialist Sinclair Lewis' novel "It Can't Happen Here" was published. At the time, Germany's NSDAP (National Socialist German Workers Party) had been in power for two years with its party leader, Adolph Hitler occupying the office of Reich Chancellor. The policies put in place by the German government were already generating outcries in western societies and the title of Lewis' novel appeared to refer to those events as they might apply to the American experience. Interestingly enough, Walter Duranty garnered a Pulitzer prize in 1932 for his hagiographic treatment of Joseph Stalin and his policy of collectivizing the Kulaks in Ukraine which resulted in mass starvation.

During the fourth decade of the 20th century few were the number of scholars who connected the dots and could conclude that the political/economic philosophies of Fascism and Communism were joined at the hip by an adherence to totalitarian collectivism. Most assumed that given the mutual enmity professed by the two collectivist political parties it was evidence that they were polar opposites. That error continues to this day.

Mr. Lewis' inference that the trappings of totalitarian collectivism "Can't happen here" would today fail the test of objective observation. Given the provision in the Fourth Amendment to the Constitution that "The right of the people to be secure in their persons, houses, papers, and effects, against unreasonable searches and seizures, shall not be violated, and no Warrants shall issue, but upon probable cause, supported by Oath or affirmation, and particularly describing the place to be searched, and the persons or things to be seized." it is difficult to reconcile the practices of the Federal Transportation Security Administration at the nations airports with that proscription. It is one thing to assert that the possibility of a "terrorist's" hijacking of an aircraft for an attack justifies the current draconian procedures at airports of strip searching at random senior citizens and infants; but in the opinion of this writer quite another to extend this policy to include various forms of surface transportation such as busses and trains.

Although the TSA is best known for its agents at airports, the agency's Visible Intermodal Prevention and Response, or VIPR, teams stage periodic operations at bus and train stations, ports and other transportation centers. They began work in December 2006.  Thursday's daylong event was the first at a Greyhound station in Florida, said John Daly, TSA security director for the Orlando region.

The below graphic is eerily reminiscent of the scenes above in the Soviet Union and Nazi-occupied Europe of civilians being forced to submit to arbitrary searches and questioning by government officials.
One subject of the activities in Orlando who stated that he had chosen the bus over air travel to Minneapolis in order to avoid the airport indignities stated that he would "drive next time". One should not be surprised however, to, in the not too distant future, encounter highway checkpoints. In other words dear reader: "it's already here" and there is very little outrage manifested. 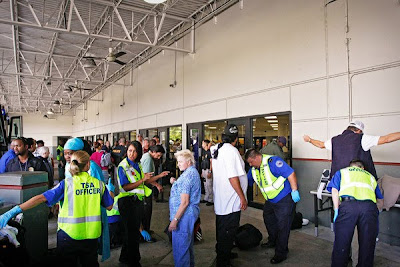 We are now inmates, and must be frisked and questioned when we move from our cells to the yard.

the link to Bus Terminal Story is broke.

(comments do not support long links: copy and paste and connect the pieces)

What is happening is frightening; and what follows is even more disturbing, but inevitable.

Sure, I see the comparison...modern air travel and being shipped off to a death camp.

Sure, makes sense. I guess. If you're a moron.