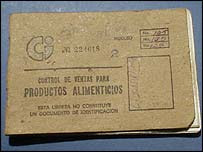 The United Nations is the gift that just keeps giving; TO TYRANTS!

The august body recently sent a human rights mission to Cuba to underscore a new "right" to be included in its list of "human rights". This is the "right to food" which has been enshrined in the Cuban constitution. These missions are usually headed by "experts" in the various fields, in this case Jean Ziegler, a far left Swiss academic. Previous human rights missions had been denied entry to Cuba but with the appointment of herr Ziegler an invitation to Havana suddenly materialized.

Prior to and during Herr Ziegler's visit to Havana he issued several statements including the following:
1 “Cuba was the first country to promote the right to food.”
2 “Ensuring access to food has remained a priority of the Government [of Cuba].”
3 The Cubans have found solutions regarding the right to food in difficult conditions,"
4 Cuba has been able to deal with food limitations and the suffering caused by the US economic
blockade.
5 He did not see any undernourished person in Cuba, something that is commonplace in other countries...

It is unlikely that Herr Ziegler was issued a ration book as are Cuban citizens who do not utter statements objectionable to the Communist apparatchiks. The ration books are REQUIRED to be able to purchase the less than 2000 calories per day allotted to citizens other than the government officials and are routinely seized from political dissidents.

Herr Ziegler, although an erudite Swiss academic, appears to be language challenged. He is unable to distinguish the difference between "blockade" and "embargo"; or perhaps not.

In case anyone is interested, the right to individual self defense is NOT recognized by the United Nations.

The chief function (of propaganda) is to convince the masses, whose slowness of understanding needs to be given time in order that they may absorb information; and only constant repetition will finally succeed in imprinting an idea on their mind ... The success of any advertisement, whether of a business or a political nature, depends upon the consistency and perseverance with which it is employed.
August Kubizek, a boyhood friend of Adolf Hitler.